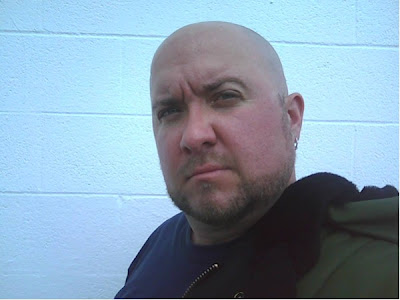 Come work a day or two with me; you'll look like this too.

Due to a surprising amount of curiosity as to what it is that I actually do for a living, I’ve determined that it’s time to divulge what keeps the lights on at The Command Bunker until such a time as someone out there decides to pay me to sit at home swilling coffee and writing my pithy, witty repartee all day. Just what, exactly, is my Day Job?

I moved to South Carolina from Maine at the end of my first marriage. One of my chief reasons was that I was really sick of being cold. However, on a daily basis I find myself in a situation where I am subjected to subzero temperatures, and shovel more snow, than I ever did when I lived in Maine. In fact, my friends still in Maine can stop complaining about winter, because for me, everyday is winter. Ironically, I moved here to be warm, and I work in a freezer.

I work for a major regional dairy corporation, specifically as the shipping clerk for the Ice Cream Department. I spend my days filling orders from our various branch locations by pulling from inventory and loading up pallets full of frozen delights for shipment. That’s the short version of it. The longer version……well…

I’m up at 5AM and out the door at 5:30 for my commute into Charleston. The drive in isn’t so bad, really, at least not till I get to the intersection of Dorchester Road and Bacon’s Bridge, where I start meeting up with The World’s Worst Drivers. Guys, I’ve driven in at least 30 states and 4 countries, and I’m pretty damned sure, the drivers in South Carolina are the worst I have ever encountered. I pull up to the entrance gate of the SC Ports Authority’s Veteran’s Terminal at about 6:45, and then the fun begins. 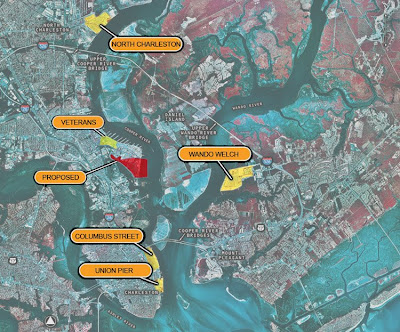 The various port terminals for the Port of Charleston. I'm on Veteran's Terminal. Most of the action is downriver from me.

Each time the door opens, some warm, humid air gets sucked into the rafters, where it eventually freezes into snow. Yes, I step through a few inches of snow every day.

Granted, I’m not in there all day for 8-10 hours a day. Me and the other guy I work with (yeah, there’s only two of us) stay in for 30-45 minutes at a whack, and then come out for maybe 10 to warm up. Coming out of the freezer itself, I first step into a hallway called the Pre-Cool Room, which is a balmy 30 degrees. A few feet later, I’m outside facing the lovely Cooper River. On a day like this past Friday when temperatures hit 100, my body goes through a change of nearly 120 degrees in the space of 25-30 feet.

Right on the river, but I still get a wicked good view of the Garbage Incinerator too.

So after loading hundreds of items onto pallets for 8-10+ hours and shipping them out, I get to fight even worse traffic for anywhere from 90 minutes to 2 hours on the interminable commute home. I fight freezing temperatures, blazing temperatures, throw a few hundred 3-gallon tubs of ice cream and a few thousand pints and cones and half-gallons across a frozen room, I struggle through a sea of idiots to and from, and finally arrive home to hopefully write a little amusement for you guys. Summer is of course twice as busy as the off-season. Most nights lately I’m getting home in the 7:00 PM time frame. After a quick shower and some dinner, that ain’t much time to spend with Mrs. Steve and the dogs before bed.

It ain’t glamorous but it pays the bills.

So now you know. And this is why I don’t write as often as I’d like to. 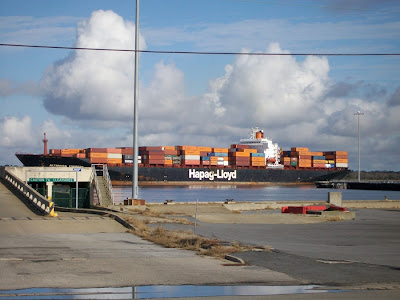 b.s. i know you secretly write for dick cheney and rush limbaugh. you look totally thuggish with the smooth dome.

Thanks, Jim. You've known me for almost 20 years and remember me when I was young & pretty. Maybe our time in the Army would have been different had I looked more thuggish back then? The new bald skull is starting to grow on me so to speak. I'm diggin' it.

And if Cheney or Rush wanna pay me to write, they're welcome to do so.

Hi Steve: That was really interesting, and as you know very ironic that you left a cold climate to more somewhere warm, and turn out being more cold! Heck, I got cold just reading about it. You're a great writer and I hope someday you get paid for your pithy comments....I harbor the same wish myself.

Thanks for visiting and following my blog, I've returned the favor. I like your style and pics...you've a good blog here...and I will begin my applied inactivity too.

Do you have a favorite flavor?!!!

I try & avoid ice cream. I'm just lactose intolerant enough that it kinda tears me up a little.

I visited Charleston this spring. Wish I had know this then. I've been trying to get a tour of one of the ports, especially where they take the 18-wheeler trailers off a ship with one of those big cranes. I enjoy watching those...

Alas, but my terminal is what they call "break-bulk", which means that the ships offload their cargo with their own onboard cranes. The container terminals (the other ones, like Wando, Union, Columbus Street and North Chaz) have the massive cranes that take the TEU containers on & off the ships.