It sounded good on paper....kinda? 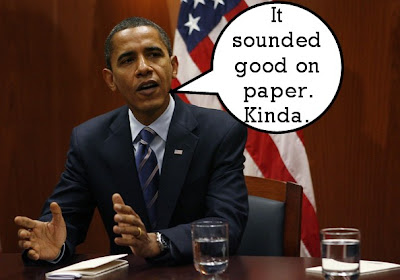 I commute about a hundred miles each day round-trip. Along my route I pass several car dealerships; one large Ford dealership, a recently-shuttered Buick/Pontiac dealership, and (seriously) about 30 used car lots. If I take a slightly different route along two different streets, I’ll still see about 30 used lots, but my number of new dealers would increase to about 9. This said I kinda have a pretty good grasp of the local car business.

When no one was getting financed for new cars, folks were either buying used or just keeping their old cars and fixing them up, which was a boon to local mechanic shops and to parts dealers.

And then along comes Obama’s Quick Fix, Cash for Clunkers.

Even with $2 billion of stimulus money force-fed back into the ailing program, the Feral Gummint™ Car Allowance Rebate System isn't fulfilling its promise of reimbursing cash for clunkers to dealers in a timely manner.

The Cash for Clunkers program is designed to kill two birds with one stone: stimulate the ailing automobile market while getting pollution-heavy, older cars off the roads.

Oddly, though, as part of the program, a dealer must destroy the traded vehicle with some rocket-scientist hocus-pocus.

The service department at each dealership combines 40 percent sodium silicate and 60 percent water to produce "liquid glass." The oil is drained from the vehicle and replaced with the solution, causing the engine to break down. It usually takes two quarts to kill the engine and the government strongly advises the individual disabling it to wear gloves and goggles and avoid any direct contact with the solution. The White House has you fill the system with toxic sludge and then from here, disposal centers pick up the clunkers and turn them into scrap metal full of toxic goodness.

But dealers are holding off on starting the disposal process. The government said that dealerships would be reimbursed – they must give the customer credit at time of trade from their own pockets – within 10 days of submission. Dealers must cover customer rebates out of pocket and wait for reimbursement from the Feral Gummint™. Some have said their reimbursement requests have not been approved, leading to a cash crunch. That's key because dealers typically borrow money to put new cars on their lots and must repay lenders within a few days of a sale.

The Greater New York Automobile Dealers Association, which represents dealerships in the New York metro area, said about half its 425 members have left the program because they cannot afford to offer more rebates. They're also worried about getting repaid, the group said. Dealers are leaving the program by the hundreds because the program, with its recent injection of 2 BILLION dollars on top of the original 1 billion, is reimbursing the dealers at a snail’s pace. They have a couple hundred employees to process a couple hundred THOUSAND reimbursement deals, all time-sensitive.

There’s your Feral Gummint™ at work. They didn’t exactly think this shit through. This program is being run with the usual governmental efficiency one finds in the Postal Service and Amtrak, both hemorrhaging money.

Now, there’s a couple other snags to this program, too. I heard a commercial this morning for a local dealership nudging people towards new cars because due to the C for C program, they had a shortage of used cars from trades to sell. Used car lots are suffering because they have to destroy cars that they’d otherwise be able to sell. And since the cars are to be destroyed, the usable parts that might have ended up in a specialty wholesale parts lot are ending up scrapped. And hell, the scrap is tainted…

So much for the Green Movement, Libs! Sodium carbonate and silicon dioxide react when molten to form sodium silicate and carbon dioxide. That’s right, Al Gore! This awesome program to rid the world of big old Detroit monsters in favor of your little sissy hybrids is creating evil carbon dioxide as a byproduct…and you Global Warming assholes have declared carbon dioxide to be a greenhouse gas that must be stopped at all costs. 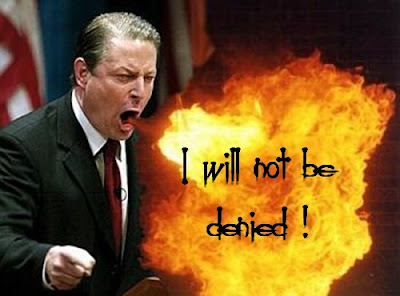 The irony is delicious. Save the environment by releasing toxins and greenhouse gas. 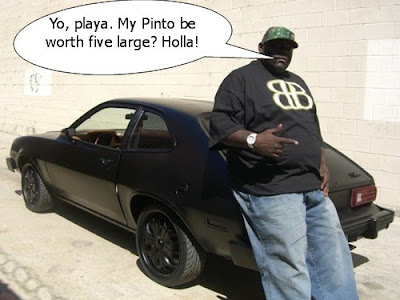 Email ThisBlogThis!Share to TwitterShare to FacebookShare to Pinterest
Labels: cash for clunkers

More wisdom from the wonks at Government House. What a bunch of losers!

i'll bet that uncle sugar refuses to pay, saying that they (the dealers) are just repaying the governments bailout loan.

Great post.......if we had an honest media, we'd be hearing this stuff more overtly and more Americans would be waking up!

That's scary to think that me, who only gets to write a few minutes a day if I'm lucky, after working my day job, puts out better information that dedicated multi-billion-dollar news agencies......

Please get the facts straight. The chemistry as stated here is a big mystery: "The service department at each dealership combines 40 percent sodium silicate and 60 percent water to produce "liquid glass."" It's later stated: “Sodium carbonate and silicon dioxide react when molten to form sodium silicate and carbon dioxide." Which of these two reactions is correct? The first reaction contains no carbon, thus can’t produce CO2. The second does but isn’t a reaction pertinent to the CARS program. In fact, only the first reaction has anything to do with the process of disabling engines in the CARS program. With the engine running, sodium silicate is dumped into the oil intake and eventually precipitates, which causes the pistons and bearing to seize. Absolutely no CO2 is produced in this process. Delicious irony indeed...

Oh, look, kids! My very own troll! And without a public profile either...there's a fucking shocker.

So, professor, where'd you get your degree in chemistry?

Admittedly, I wasn't a Chemistry major; my major was Criminal Justice and Criminology.

Now , mayhaps I didn't state it QUITE clearly enough for all of you. I seldom reveal where I get my info from, since I seldom get trolling Liberals and complainers here to bitch about things, but today I shall.

See, the part about the service departments adding the 40/60 blend of sodium silicate and water was listed from an article in the Killeen Daily Herald by Matt Goodman (http://www.kdhnews.com/news/story.aspx?s=35218) and most newspapers write for people on a 5th grade reading level. Guess you missed that class.

Now, the part about how silicon silicate is MADE, was lifted from the Wikipedia entry for sodium silicate. (http://en.wikipedia.org/wiki/Sodium_silicate)

Now,as I read the words, when you MAKE sodium silicate, you mix sodium CARBONATE (hey, look, CARBON!) and silicon dioxide, and when it melts and combines, you get, voila, sodium silicate and.....c'mon...say it with me..carbon dioxide.

Now, we have this sodium silicate that was made, and then we mix THAT with water, and pour it into those evil clunkers, and we get free money from Obama The Money Fairy.

your days of finger banging ol'mary jane rotten crotch thru her pretty pink panties are over!!!!

But he probably just picked up that particular line from the Kosers.

Whoo hoo! Jim knew exactly what movie I was referring to....

And Uncle Sugar and Uncle Sucker are terms that me & Jim have used for years....the "kind & benevolent" government that hands you everything you'll ever need....

No, Ducky hasn't found my blog yet. However, I'm nowhere near as tolerant or forgiving as Z is; I'd eat him alive.

BILLIONS of dollars in bailouts to GM and Chrysler to make them indebted to Obama, then he swoops in and forces them to go into bankruptcy and/or break apart & sell off assets, and flat out takes over one company, and then they can't sell jack shit.