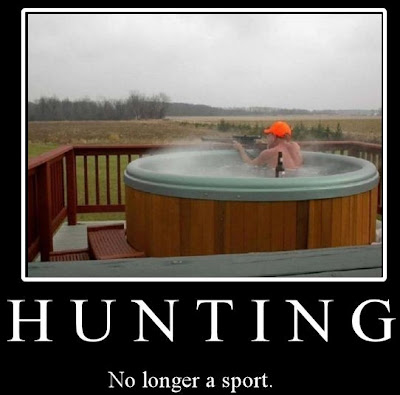 Well, shit. Somehow I managed to miss the fact that yesterday was the start of deer hunting season here in South Carolina. We have the longest deer season in the known universe, running from August 15 to December 31st, in an effort to cull down the vast amounts of deer not much bigger than antlered dogs that are rampant in a state that sees summer almost 9 months a year and lacks apex predators to eat them.

So, when the local menfolk aren’t watching NASCAR or football, they’ll be drinking heavily and sitting in a tree waiting for something to wander by so they can try to kill it. The more active hunters will set loose a pack of dogs to herd the deer towards wherever they happen to be sitting, waiting to kill something.

As a non-hunter, this affects me still nonetheless. See, now I’ll have to worry about even more of those damnable Great Dane-sized deer running in front of my car than usual, agitated and scared. My morning commute takes place under cover of darkness and on back-ass country roads for the first 25 miles or so. My other obstacle is hunting dogs. Hounds are a dime a dozen here. A lot of unscrupulous hunters aren’t that concerned with getting all of them back at the end of the hunt, and the worst of the batch just turn them loose at the end of the season to run wild, stray, fending for themselves, rather than spend the effort to feed them like working pets. The ones that really kick my ass are the guys who only want the dogs back because they affixed them with radio collars to track them and the collar is worth more than the dog.

For the next six months now I’m gonna be dodging sad-looking neglected stray hounds walking alongside Highway 17-A. I’ve already seen a couple. Most of them eventually do get rescued though. 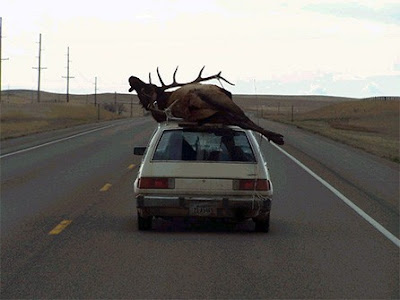 So, even though I’m not a hunter, as I previously stated, I do have extensive experience with firearms safety, and I’d like to offer up some helpful advice to you erstwhile hunters out there.

Make sure you know what it is you’re shooting at. Don’t be a dumbass and shoot a horse, cow, goat, dog, or fellow hunter. Be respectful of people’s property, lest they shoot your trespassing ass. Try saving the beers for afterwards, not before and during. I simply can’t fathom someone sitting in a deer stand with a 12-pack and a loaded weapon. Don’t hunt at night. Besides being illegal, the last thing I wanna hear at 1AM is you’re rifle shots and then a four-wheeler dragging the carcass out to your truck. (I was walking the dogs at 3AM today and heard ATV’s about a half-mile off). And lastly, take care of your dogs. They’re just poor animals who happen to have a skill set that differentiates them from the average housepet. Don’t discard them like empty shell casings. 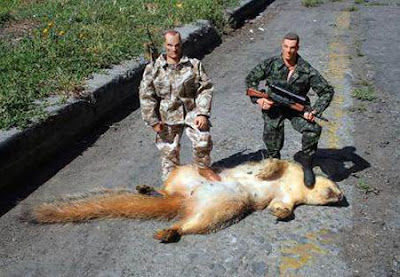 As a hunter, your advice is spot on. You don't know how many guys I've stumbled upon sitting there with a rifle across their laps and a cooler with a six-pack in it on the ground. It's disgusting.

I like to hunt, although mostly just birds. Love the squirrel pic. It is one of my faves.

Take care of your damn dogs or I will hunt YOU.

Although, 4 or 5 Great Dane sized deer would feed me and mine for awhile.