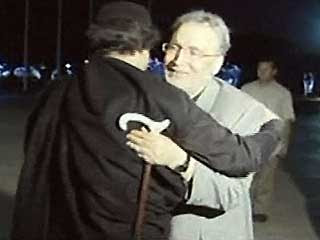 Hugs and Kisses and Terror! Oh, my!

Y’know…I’m beginning to think I’m some kind of idiot savant with psychic leanings. I’m starting to mention things here, and then things mysteriously happen. I call attention to the Gestapo Snitch Line, and then suggest that you might wanna spam it a bit and send them stuff like oh, say, the entire verbiage of the health-scare bill, and within a week the Feral Gummint™ has to shut down the Snitch Line. I point out the toxic idiocy behind the Cash for Clunkers Program mandate to destroy the trade-ins and the inability of dealers to get repaid, and within a couple days they shut down the program citing that it’s out of money. I tell you about Obie’s upcoming vacation to Mecca’s Vineyard, and not only does Cindy Sheehan say she’ll tag along, and The First Vacationers had to reschedule their grand and glorious arrival amongst the idle rich as what’s left of Hurricane Bill floated past.

And then I told ya’ll about a Scottish judge who was fixin’ to let convicted Pan Am 103 bomber Abdel Baset al-Megrahi out of jail on a compassionate release so he could die at home in Libya from his prostate cancer.

The Libyans promised that his release would be “low-key” out of respect to everyone involved, and that was bullshit. Libyan leader/head crackpot Muammar al-Khaddafi (pick your favorite spelling) sent a private Airbus jumbo jet to pick up his old buddy. The crowds gathered in Tripoli to meet our returning terrorist made the scene look like the arrival of the Beatles in New York in 1964. Thousands cheered and waved flags and threw rose petals. Levaes the prison wrapped in a white robe and towel, damn near on a gurney, and exits the plane in a dapper black suit walking down the stairs with only a little help. 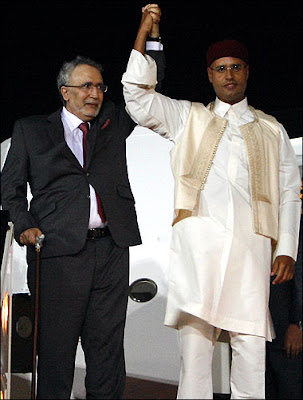 With television cameras rolling, Khaddafi hugged Megrahi, and Megrahi kissed him. Libya's leader then praised his "friend" British Prime Minister Gordon Brown and the British government on Thursday for what he called their "courage" in allowing Megrahi's release.

Megrahi’s wife was all jubilant because he got released in time for the holy month of Ramadan. Isn’t that nice? Let’s all celebrate Ramadan, why don’t we? What about the 270 people he blew up four days before Christmas? 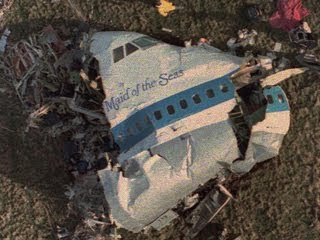 Still strapped in their seats, there's over a dozen bodies under that slab of twisted metal that used to house the flight deck and part of the first class section.

Supposedly, Megrahi is so sick that he has but just three months left to live. Something tells me that he’ll linger on awhile, advising Libya and every other terrorist state on how best to continue killing us.

Maybe they’ll hold a summit meeting and call a conclave of terrorists that we keep releasing? You have Khalid Duhham Al-Jawary, a former car bomber that we cut loose back in January. We have Said al-Shihiri, released after six years in Gitmo and then turns up as the Number 2 guy in al-Qaeda in Yemen. And now we have Megrahi running free again.

Even if he does die by the end of the year, he’ll still be an inspirational martyr for the next generation of terrorist assholes. He’s the man who slayed the infidels, was imprisoned illegally in some infidel jail, was given prostate cancer by infidel scientists, and was released under the pressure of fear of reprisals from glorious Islam and the brave warriors of Allah, blessed be his name. Excuse me whilst I puke.

And the Scottish government has the gall to be all indignant that the rest of the world is pissed off for this guy going free. But I regularly peruse a couple British newspapers online and the comments that readers leave on the articles about this seem to side against the government. And of course the whole Gordon Brown administration is scrambling fast to deny that they released Megrahi for a huge oil deal for BP.

Remember when we took Libya of the terrorist watch list and they agreed to pay restitution of a couple billion dollars for this little plane-bomb thing? Yeah, it seems they are trying to opt out of the last $400 million, claiming that we didn't take them off the list fast enough. Kiss my ass, Libya. Maybe we should just put you BACK on the list? Remember, Muammar, we bombed your ass once in your safe tent in the desert, and we shot down a couple of your planes before as well. We should have shot this one down too. Oh, wait...Reagan was President back then, and he had a spine. This one will just invite you over for a beer. A shame you Muslims don't drink... 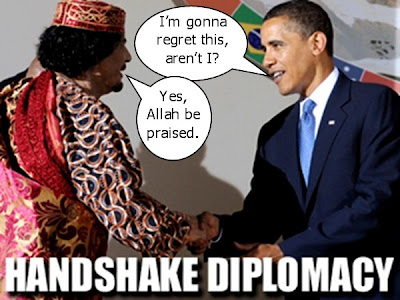 Here’s a final bit of food for thought… He served only six years in prison for killing 270 people. Do the math. That’s approximately 11.5 days in jail for each person he killed; e-l-e-v-e-n days. How much is your family worth? 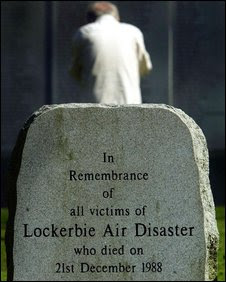 Back home in time for the same holiday that Obamarx took much glee in giving the Towelhead world community warm wishes for. Frickin' turds!

Eleven days in jail. That puts it all into perspective. Not right.

And if anyone thinks I'm full of shit, go read Bill Leckie's column at The Scottish Sun's website. Sure, the Sun is a noted tabloid mostly known for football coverage and half-naked women all over the pages, but this guy has his shit together:

How MUCH was the judge paid to let the terrorist go free?

If he didn't get at least a million pounds, he's poor negotiator and a cheap date. The question is where the Libyans put the money? Swiss account, suitcase of cash?

Yo Steve, congrats on how well your blog is doing. I really like reading it. Even though we don't agree on everything, I love that we have so much in common and that's what makes us friends. I'm proud of you man. I was thinking that maybe once i get my Web-zine online, maybe you could have a column on it. We can talk about it. I'm in NY For work. Crazy. Hope you're well.

It makes you wonder what an outright celebration would be.

The outright celebration would be done in typical Islamic Extremist fashion, with assflakes shooting their AK's into the air and the burning of American flags.

Soooooo many Scots are just flat out disgusted by this, and mortified that some Libyans were waving Saltire flags...

s'ok he's coming to NJ and speaking at the UN of all places..can u barf or what!!

This is one of the most obscene things I have ever seen, by far!

No matter how long this evil bastard hangs on, his release will be a rallying cry for Islamist murderers everywhere.

So much for "compassion", eh, Scotland?

I'm so livid I don't know what else to say.

Nice post, I just wrote on the same subject. Check it out!
BCA
http://moderatescope.blogspot.com/2009/08/justice-not-served_24.html