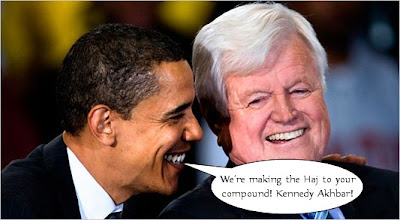 Let me preface this by adding new words to your vocabulary. You'll be seeing them all over the place soon. Start using them. Make me famous.

There comes a time in every young Democrat’s life when, like a devout Muslim, they feel the need to make the sacred pilgrimage to one of The Left’s holiest of holy places. Instead of making the Haj to Mecca, they make a vacation trip to Martha’s Vineyard.

Once there, they visit such shrines as The Holy Kennedy Compound to worship the Great Family. They leave flowers at the airport at the Shrine to Saint John John, who perished whilst flying to the island. And they leave Chivas Regal bottles at the Chappaquiddick Bridge in hopes that Saint Ted (Patron Saint of Foppery) will magically allow them to get away with any and all crimes scot-free.

And as devout followers of Isleft, making a return trip to Mecca’s Vineyard is the Obama family.

President Obama and the first family (and no doubt accompanied by countless strap-hangers) will rent a scenic farm house on Martha's Vineyard for their vacation during the last week of August.

The Blue Heron Farm, located on the island's western end in Chilmark, is a sprawling 28.5-acre private residential compound with a five-bedroom white Victorian farm house, and three other dwellings, including a reconstructed Pennsylvania hay barn and Vermont shed, an apple orchard, swimming pool, golf practice tee, basketball half-court, and a basement movie theater. It has ocean views, private access to a stretch of Squibnocket Beach, and a private dock with kayaks and a yacht.

Wow. All I got was a half acre, a small brown house, fire ants, crabgrass, and a living room theater consisting of a DVD player and the DVR hooked up to Dish Network.

Though the cost of the rental has not been disclosed, island rentals comparable to the farm rent for between $35,000 to $50,000 per week, according to sources who know how the idle rich operate.

The farm was purchased for $20.35 million by owners William and Mollie Van Devender (prominent Republican supporters) in 2005. At the time it reportedly was the second highest price paid for a single residential property in the history of Mecca's Vineyard. This could be the first & only time during the Obama Reign that Republicans will see any money come their way. The farm's previous owners, wealthy real estate developer Tony Fisher and his wife Anne, hosted a lavish dinner party there for Bill and Hillary Clinton in 1998. The Fishers died in a plane crash in 2003, part of a laundry list of people connected to the Clinton’s to die (Go look up “Clinton Body Count” on Google).

Oh, boy! Know where I spent my time off last month? My house. Why? Because in this crapfest of an economy, I couldn’t afford the luxury of going somewhere exotic & cool. And I’m certainly not alone. Most of America, if they get to take any time off at all, is doing the Staycation thing. A lucky few thousand, however, get to take an extended trip to exotic places like Afghanistan or Iraq, while our Dear Leader is shuffling off to a house so exclusive that people like us wouldn’t even be allowed to cut the grass there. 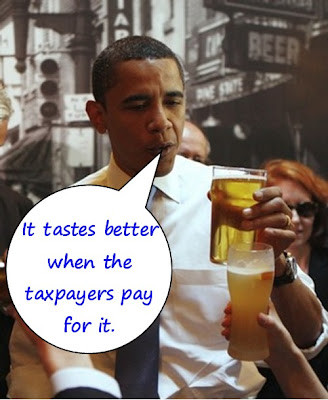 You’d think that with so many millions of people unemployed, and millions more living hand to mouth, paycheck to paycheck, that he’d have taken a lower-profile break at Camp David. (You know, that place specifically set aside as the presidential recreational facility?) We’re paying for a vacation spot that he ain’t using; I hope to hell I ain’t paying for this farm, too. I’m already paying for all the staff and entourages and security people.

I’m sure they’ll feel obligated to throw at least one shindig at the farm. Maybe they’ll invite Gates & Crowley, America’s newest bosom buddy Odd Couple, over for beers too, since they’re both just a couple hours away. In addition to a choice of frosty beers, I’m sure Michelle will have the galley scullions whip up some Wagyu beef burgers. And after dinner everyone can play pin the tail on Joe Biden. 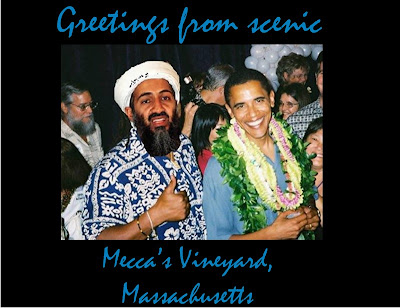 you forgot isfucked...this is both a noun--where we are going as a country, and an adverb--what is happening to our saving-investments, health care, basic freedoms,etc.
everyone sing along now, (to the cadence of the old mickey mouse song), f-u-c-k-e-d a-g-a-i-n!!!

Kinda reminds you of the unit we served in together and the old Army acronym...BOHICA....Bend Over Here It Comes Again...

well done..very clever.
But, you put me in one BAAAD mood this morning!!

lets just put our heads in the sand..and poof!...these leftards are gone!