A Russian Akula II nuclear-powered attack submarine. Nasty, but ours are nastier.

It’s the dog days of summer and all the nation (or at least a few people) are all a-flutter about reports of a couple Russian submarines conducting training in international waters.

It reminds me of the Bad Old Days when both the Soviets and us kept subs off each other’s shores on a continual rotation.

I’m of mixed feelings about this. (Of course)

Part of me says that it’s international waters and everyone has a right to sail the high seas so long as they stay outta people’s sovereign back yards. Can’t sink a dude just for sailing the high seas.

Another part of me kinda chuckles at this. It’s been years since we gave the Russian Navy much more than a sideways glance. We kinda got used to the notion of former Soviet boats rusting away at the piers because the Russians ostensibly lacked the funds to keep the hulls in good repair, or buy fuel & supplies, or to pay the sailors to man them. In fact, they were getting other nations to take away their old boats for scrapping. I was almost thinking that the only way one of their subs would get here was to be towed here. 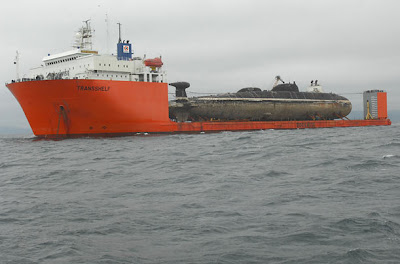 I used to think that this was the only way we'd see a Russian sub off America again any time soon; someone would have to tow it over. 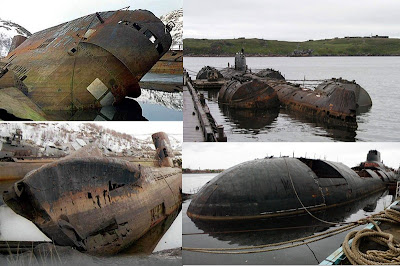 Admittedly, even I've been guilty of the school of thought that this was the state of the bad-ass Russian sub fleet we worried so much about in the Bad Old Days.

Part of me raises an eyebrow at this saber-rattling. For all of you who keep saying Russia is our friend and we’re good buddies and they’d never hurt us, you’re sadly mistaken. You’re either naïve or just plain dumb as dog shit. In the past year or so, they’ve taken to dusting off those ancient propeller-driven shitbox bombers of theirs and flying into other countries’ airspace and buzzing our carriers. And we won’t even go into that whole pesky invasion of neighboring Georgia.

But in the end, I gotta agree with Bubblehead over at The Stupid Shall Be Punished (www.bubbleheads.blogspot.com), who says that this is actually a great training opportunity for our submariners, as well as for our surface and air anti-submarine warfare (ASW) crews. The Russians sent at least one Akula II attack sub to lollygag offshore, and that’s currently their best sub. So, like Bubblehead says, let’s not disappoint them, and show them how the game is really played.

I used to keep up with the US/Soviet submarine happenings before I joined the Army, back when I was living at home with a step-father who was a sub officer in the Navy. We’ve always had better ships, better gear, better tactics, and better sailors. Our subs routinely crawled up their asses and took incredible pictures. I saw one of these shots (now a somewhat famous pic) blown up to poster-size in the wardroom of USS Philadelphia about 23years ago. It was a dead-astern shot of a Soviet Victor III attack sub on the surface, and we were so close we could almost smell the vodka. That’s how good we are. 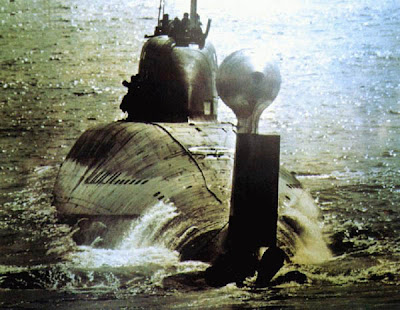 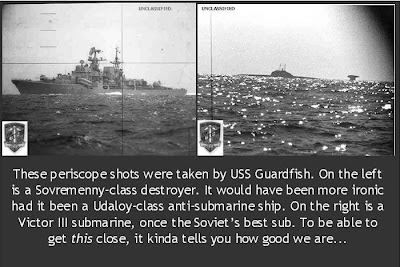 This should also serve as a wakeup call to all those in the current administration who think there are no more threats to America and our freedoms, for those who think that no foreign navy would dare park a sub off our shores, and we need to keep maintaining our vigilance. We need to maintain our ASW assets. We need to stop gutting our sub fleet into razor blades. We need to stop saying that we don’t need to explore new submarine technologies or build new boats because there’s no threats.

I know I’m preaching to the choir here, since the people who need to listen have their heads too far up their asses to hear me. Perhaps they’ll hear it when the Red October surfaces off Martha’s Vineyard and disrupts VodkaFest 2009 at the Kennedy Compound or sends some Spetznaz teams ashore to say hi to Obama at his 25-million-dollar vacation rental? Oh, wait…Pelosi will be there to welcome them with open arms to the People’s Socialist Republic of Mecca’s Vineyard…. 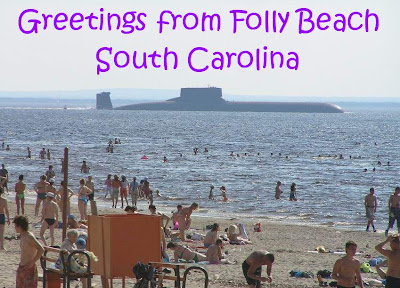 I was a teenager during the Cold War, but I was never as afraid under Reagan as I am under this administration. At least Reagan didn't want to control the American people and stifle dissidents.

Korea is a loose cannon, but we can handle them pretty well, because China would likely help us. China considers them a wayward stepchild. China is conquering us economically, not militarily. They'd love to beat us but if they do, they'll lose money. We're a necessary evil to keep around. Terrorists and Islamic extremists want us all either devout or dead, but they're too few to beat us. But Russia...yeah, they have this complex and mentality that says "We must break you"