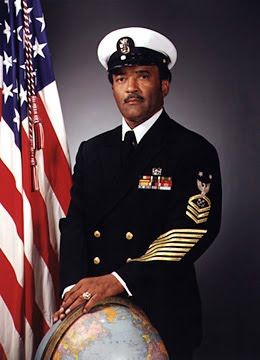 Born in 1931 in Tonieville, Kentucky, the child of sharecroppers McDonald and Gonzella Brashear, Master Chief Boastwain’s Mate (MDV) Carl Maxie Brashear was the first black sailor to become a Master Diver in 1970 and later the first amputee to be recertified as a Master Diver.

Brashear enlisted in the United States Navy on February 25, 1948, shortly after the Navy had desegregated. He graduated from the U.S. Navy Diving & Salvage School in 1954, becoming a U.S. Navy Diver. He was the first black Navy Diver, becoming the first to attend and graduate from the Diving & Salvage School. His exploits were documented in the film “Men of Honor”, with Cuba Gooding, Jr. playing Brashear. 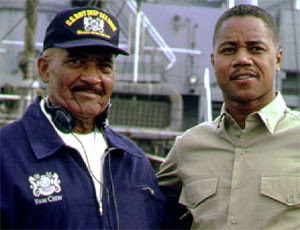 Cuba Gooding and Carl Brashear on location while filming Men of Honor.

In January 1966, a B28 nuclear bomb was lost off the coast of Palomares, Spain after two aircraft of the Strategic Air Command , a B-52G Stratofortress bomber and a KC-135A Stratotanker, collided during aerial refueling. Brashear was serving aboard the USS Hoist (ARS-40) when it was called in to find and recover the missing bomb for the Air Force. The warhead was found after two and a half months of searching. During recovery operations on March 23, 1966, a line used for towing broke loose, causing a pipe to strike Brashear's left leg below the knee, nearly shearing it off. He was evacuated to Torrejon Air Base in Spain, then to the USAF Hospital at Wiesbaden Air Base, Germany; and finally to the Naval Hospital in Portsmouth, Virginia. Beset with persistent infection and necrosis, and faced with years of recovery and rehabilitation, Brashear convinced his doctors to amputate the lower portion of his leg.

Brashear remained at the Naval Regional Medical Center in Portsmouth from May 1966 until March 1967 recovering and rehabilitating from the amputation. From March 1967 to March 1968, Senior Chief Brashear was assigned to the Harbor Clearance Unit Two, Diving School, preparing for return to full active duty and diving. In April 1968, after a long struggle, he became the first amputee to be certified as a diver. In 1970, he became the first African-American U.S. Navy Master Diver, and served 10 more years beyond that, eventually achieving the rank of Master Chief Boatswain's Mate in 1971. Brashear was motivated by his beliefs that "It's not a sin to get knocked down; it's a sin to stay down" and "I ain't going to let nobody steal my dream".

BMCM (MDV) Brashear retired from the U.S. Navy on April 1, 1979 as a Master Chief Petty Officer (E-9) and Master Diver. He then served as a civilian employee for the government at Naval Station Norfolk, Norfolk, Virginia and retired in 1993 with the grade of GS-11. Brashear was honored with the Secretary of Defense Medal for Outstanding Public Service in October 2000 for 42 years of combined military and federal civilian service. The award was presented by Secretary of Defense William Cohen. Brashear died of respiratory and heart failure at the Portsmouth Naval Medical Center, Portsmouth, Virginia on July 25, 2006. He is buried at Woodlawn Memorial Gardens in Norfolk, Virginia. 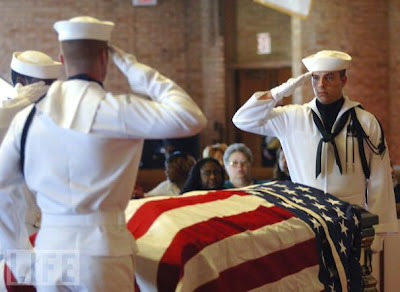 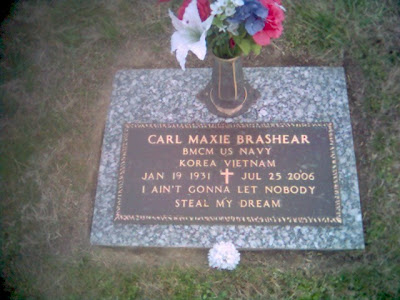 Carl Brashear's honor guard at his funeral and his grave marker in Norfolk.

Thank you very much, Sam. I hope you decided to take a look at the entire month-long series. I felt it was important to give some different strong black role models for youngsters instead of the same 6 or 7 they've been highlighting for the past 30 years. Kids today get taught about the same people I was taught about, the Carvers, the Douglasses, the MLKs, and I don't mean to knock their contributions or sacrifices but these people I highlighted are heroes one & all.

Wow, just finished watching Men of Honor, and this inspiring honorable man made me proud to be an American. What a man Carl Brashear was, what a man.