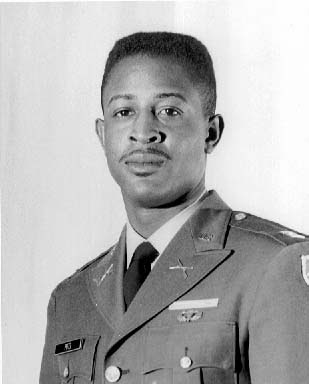 Riley Leroy Pitts was born October 15, 1937 in Fallis, Oklahoma. He attended Wichita State University and graduated in 1960 with a degree in Journalism. Pitts married Mrs. Eula Pitts and had a daughter, Stacie, and a son, Mark, while employed with the Boeing Corporation. After being commissioned as an officer in the Army, he was sent to Vietnam in December 1966. Pitts had seven years of service in the Army.

In Vietnam, Pitts served as an information officer until he was transferred to a combat unit. As a Captain, he then served as commander of C Company "Wolfhounds", 2d Battalion, 27th Infantry Regiment of the 25th Infantry Division. On October 31, 1967, just one month before he was to be rotated back home, his unit was called upon to reinforce another company heavily engaged against a strong enemy force. Captain Pitts was killed in the ensuing action.

Captain Pitts is survived by his wife, Eula and his daughter Stacie and son Mark. Mark became an active member of the organization "Sons and Daughters In Touch" (SDIT) where he traveled to Vietnam to commemorate a memorial for his father. Numerous organizations have honored the first black officer Medal of Honor recipient by naming parks and organizations after him. 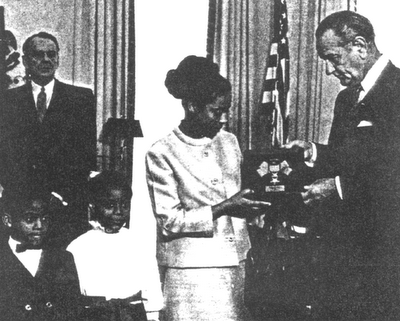 President Lyndon B. Johnson presented the Medal of Honor to Mrs. Eula Pitts and his son and daughter on December 10, 1968. In presenting the award, President Johnson declared,

"What this man did in an hour of incredible courage will live in the story of America as long as America endures - as he will live in the hearts and memories of those who loved him. He was a brave man and a leader of men. No greater thing could be said of any man."

Distinguishing himself by exceptional heroism while serving as company commander during an airmobile assault. Immediately after his company landed in the area, several Viet Cong opened fire with automatic weapons. Despite the enemy fire, Capt. Pitts forcefully led an assault which overran the enemy positions. Shortly thereafter, Capt. Pitts was ordered to move his unit to the north to reinforce another company heavily engaged against a strong enemy force. As Capt. Pitts' company moved forward to engage the enemy, intense fire was received from 3 directions, including fire from 4 enemy bunkers, 2 of which were within 15 meters of Capt. Pitts' position. The severity of the incoming fire prevented Capt. Pitts from maneuvering his company. His rifle fire proving ineffective against the enemy due to the dense jungle foliage, he picked up an M-79 grenade launcher and began pinpointing the targets. Seizing a Chinese Communist grenade which had been taken from a captured Viet Cong's web gear, Capt. Pitts lobbed the grenade at a bunker to his front, but it hit the dense jungle foliage and rebounded. Without hesitation, Capt. Pitts threw himself on top of the grenade which, fortunately, failed to explode. Capt. Pitts then directed the repositioning of the company to permit friendly artillery to be fired. Upon completion of the artillery fire mission, Capt. Pitts again led his men toward the enemy positions, personally killing at least 1 more Viet Cong. The jungle growth still prevented effective fire to be placed on the enemy bunkers. Capt. Pitts, displaying complete disregard for his life and personal safety, quickly moved to a position which permitted him to place effective fire on the enemy. He maintained a continuous fire, pinpointing the enemy's fortified positions, while at the same time directing and urging his men forward, until he was mortally wounded. Capt. Pitts' conspicuous gallantry, extraordinary heroism, and intrepidity at the cost of his life, above and beyond the call of duty, are in the highest traditions of the U.S. Army and reflect great credit upon himself, his unit, and the Armed Forces of his country. 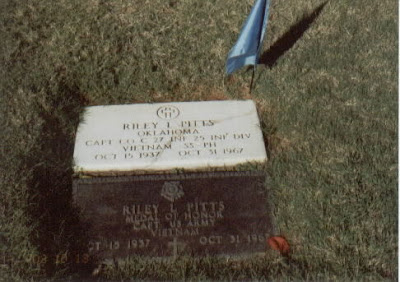 Gad, what a great bunch of posts for Black History MOnth..thank you for this.
And thank you to this amazing man who was so brave, and to his family who lost SO MUCH. God bless them all.
What a hero.

Another commendable man. This country does seem to grow them well, doesn't she?