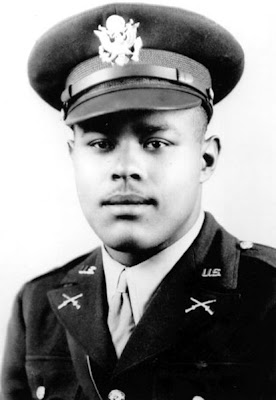 Major Charles L. Thomas (April 17, 1920-February 15, 1980) was awarded the Distinguished Service Cross for his actions while a company commander during the capture of Climbach, France in 1944 — the second black soldier to be awarded one during World War II. This award was upgraded to the Medal of Honor and awarded posthumously in 1997.

Charles Leroy Thomas was born on 17 April 1920, in Birmingham, Alabama. His family moved to Detroit at a time when the city's black population was rapidly growing. As a child, Thomas showed a bookish interest in airplanes and electronics. After graduating from Cass Technical High School in 1938, he worked with his father at the Ford River Rouge factory as a molder making steel. He also enrolled at Wayne State University to study mechanical engineering but the war interfered. Thomas was drafted and entered the army on January 20, 1942.

He started as an infantryman, but when the army began forming tank destroyer units, Charles Thomas was transferred to Camp Wolters in Texas, for officer training school. While the soldiers were black, most of the officers were white. He was commissioned a second lieutenant in March 1943 and reported to Camp Hood in Texas, to join the 614th Tank Destroyer Battalion, which was deploying with it to England and then to North-Western Europe

In August 1944 the unit was shipped to Metz, France, to join General George Patton's Third Army. Lieutenant Thomas was pleased when General Patton said that he didn't care if they were black or white, he just wanted fighting men.

In December, the 614th reached the Alsace-Lorraine region near the German border. Its mission was to capture the German-occupied town of Climbach five miles from the French- German border. The only direct route to Climbach was up a hill along an open road surrounded by woods. An advancing unit would have to distract German guns by traveling up the exposed hill while the foot soldiers would sneak up through the woods, around the German fire and into the town. This approach left the American troops easy targets for German snipers.

Second Lieutenant Thomas volunteered to lead his company up the hill. "Why did I volunteer?" he recalled."I can't honestly answer that... perhaps somewhere in the back of my mind was the fact that we had the only guns that could match the firepower of the Mark VI tanks."

On the foggy morning of December 14, Thomas led a 250-man platoon from the 756th Tank Battalion and a reinforced company of the 411th Infantry Regiment, 103rd Infantry Division, up to the road in an armored scout car. As soon as the unit had advanced, the Germans fired a lethal combination of tank and artillery fire. One blast shattered the scout car's window, spraying Thomas with glass and metal pieces. The next German round blew the tires off the car. Although badly injured, Lieutenant Thomas scrambled onto the top of the vehicle, grabbed a .50 caliber machine gun and returned fire.

Suffering wounds in the chest, stomach, arms and legs, Lieutenant Thomas crawled under the overturned car and directed the placement of his men. His men tried to evacuate him but Thomas refused until he was sure that they were well-positioned and returning fire. "This was hardly the place to... I knew what had to be done," Thomas recalled. "They say men under stress can do unusual... I know I hung onto one thought, deploy the guns and start firing or we're dead."

He briefed one of his platoon leaders, a junior lieutenant, on the general situation, and only when he was sure the situation was under control did he allow himself to be evacuated. The platoon continued to fight for four hours, losing two of its four guns and half its men as casualties There were 3 dead, and 17 wounded. Colonel John Blackshear, a white commander, said the actions of the 614th were "the most magnificent display of mass heroism I have ever witnessed."

The strong performance of the platoon ensured the capture of the town and forced the defenders to withdraw to the Siegfried Line; the unit was awarded a Distinguished Unit Citation (the first black combat unit, and the first unit attached to the 103rd Division, to be so honored) and its men received four Silver Stars and nine Bronze Stars. 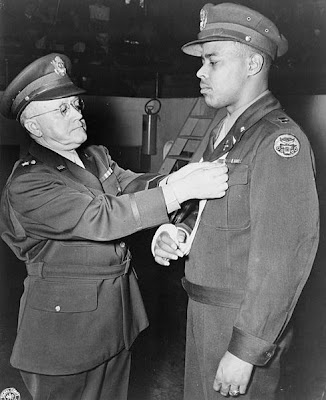 Lieutenant Thomas refused to take credit for his heroics, believing his soldiers deserved the accolades. "I know I was sent out to locate and draw the enemy fire, but I didn't mean to draw that much.". One week after the battle, Colonel Blackshear recommended Lieutenant Thomas for the Distinguished Service Cross. The award was announced in January 1945 and Thomas was promoted to captain. The men of the 614th in total received 8 Silver Stars, 28 Bronze Stars and 79 Purple Hearts.

Thomas remained in the Army, and retired with the rank of Major. He died of cancer in Detroit, Michigan, on Feb. 15, 1980 at the age of 59. He has been laid to rest at Westlawn Cemetery, Wayne, Michigan In the 1990s, following a study which indicated severe racial discrimination in the process of awarding medals during the war, it was recommended that seven Distinguished Service Crosses be upgraded to Medals of Honor, and Thomas was awarded the Medal of Honor posthumously on January 13, 1997.

For extraordinary heroism in action on December 14, 1944, near Climbach, France. While riding in the lead vehicle of a task force organized to storm and capture the village of Climbach, France, then First Lieutenant Thomas's armored scout car was subjected to intense enemy artillery, self-propelled gun, and small arms fire. Although wounded by the initial burst of hostile fire, Lieutenant Thomas signalled the remainder of the column to halt and, despite the severity of his wounds, assisted the crew of the wrecked car in dismounting. Upon leaving the scant protection which the vehicle afforded, Lieutenant Thomas was again subjected to a hail of enemy fire which inflicted multiple gunshot wounds in his chest, legs, and left arm. Despite the intense pain caused by these wounds, Lieutenant Thomas ordered and directed the dispersion and emplacement of two antitank guns which in a few moments were promptly and effectively returning the enemy fire. Realizing that he could no longer remain in command of the platoon, he signalled to the platoon commander to join him. Lieutenant Thomas then thoroughly oriented him on enemy gun dispositions and the general situation. Only after he was certain that his junior officer was in full control of the situation did he permit himself to be evacuated. First Lieutenant Thomas' outstanding heroism were an inspiration to his men and exemplify the highest traditions of the Armed Forces. 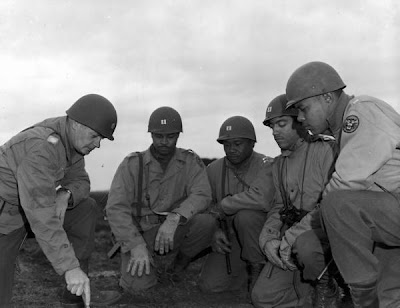