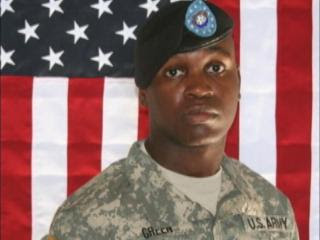 I chose to memorialize this young man to represent the new generation of young black soldiers; to show that "history" doesn't always mean decades ago; to show that today's generation of young people still share the values of courage, honor, sacrifice, and service; and finally to show that not everyone who is lost in combat is from the traditional combat arms branches of the military. Twenty-six year old Quincy Jermel Green, the son of a Navy veteran, was a chaplain's assistant assigned to the 601st Aviation Support Battalion, 1st Combat Aviation Brigade, 1st Infantry Division at Fort Riley, Kansas, my own final duty station before I left active duty. He was killed on June 2d, 2008 in Tikrit, Iraq, leaving behind his wife Lori and daughters Alanah and Kaitlyn.

The following was written by Steve Patterson for jacksonville.com :

Lifelong friends and strangers came together at a Northside Jacksonville church Friday evening to honor the 26-year-old soldier from Orange Park who died this month in Tikrit, in northern Iraq.

"God bless. I love you, Quincy," said Corey Johnson, a Putnam County sheriff's deputy who gulped back sobs after stepping to a microphone to talk about his high school friend. He recounted the kid he met in Orange Park High, the one who'd stay up late prepping for Navy Junior ROTC events and making a buck shining boots better than his classmates could.

"We were always chasing after him, but he'd slow down to help a friend," said Matt Hunt, a Marine Corps sergeant and another friend since ROTC.

He said Green, who was married with two daughters, anguished about leaving his family when he re-enlisted in the Army and was deployed to Iraq, where he was a chaplain's assistant.

"He knew the soldiers going to Iraq were going to need him," Hunt said. "That was the last act of Quincy, leaving a positive effect."

The service at The Church Fellowship Worship Ministries on Lem Turner Road drew a varied and colorful audience: some in uniforms, others in the red shirts and black vests of the Buffalo Soldiers motorcycle club.

About 30 other bikers, members of the Patriot Guard Riders, waited outside the church, carrying flags as they do at many events honoring members of the armed forces.

Inside the church, Bishop Bruce V. Allen said it was clear from people's memories that, while Green had become focused on his military service, he was still at heart the same person he had always been.

"It's good to know that the military didn't change his basic personality," Allen said. "He was a jokester, a little weird at times," and much loved, the bishop said.

Bishop Vaughn McLaughlin of Potter's House Christian Fellowship on Jacksonville's Westside described the adolescent Green he had known years ago, then the e-mail he received a few months back.

The man Green had grown into described being married and a father and asked the bishop for a favor: He hoped somehow McLaughlin could send large-print Bibles to him in Iraq, because the soldiers there needed to be able to read the Gospel in the dark.

"How many of those soldiers got their hands on those Bibles? ... How many of them found God?" McLaughlin asked. "He's left a deposit, he's left a mark on all our lives." 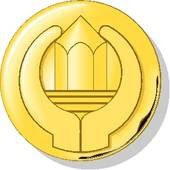