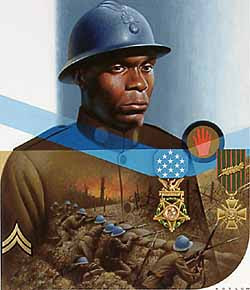 Freddie Stowers was born in Sandy Springs, South Carolina, the grandson of a slave. Before the war, he worked as a farmhand. He married a woman named Pearl, with whom he had one daughter, Minnie Lee. Stowers was drafted into the Army in 1917, and assigned to Company C, 1st Battalion of the segregated U.S. 371st Infantry Regiment, originally part of the 93d Infantry Division (Colored).

While the United States had established permanent black military units in 1866, these did not participate in the American Expeditionary Force; a peacetime role as frontier police and cavalry experts was gradually devolving into labor duties, the fate of many black troops in the world wars, despite the protests of some officers. Some of these "Buffalo Soldiers," as they were nicknamed, did participate in a border skirmish with Mexican troops near Nogales.

By 1918, the Western Front was in a complete deadlock as opposing troops of both sides refused to give ground. But German resistance began to crumble in France, thanks in part to the arrival of fresh troops from the United States. Among these reinforcements was the 93rd Infantry Division, composed almost entirely of black Americans. In battle, the 93rd soon gained a reputation as fierce fighters. Case in point was Corporal Freddie Stowers, a squad leader when his company was assigned to be a part of France's famous 157th "Red Hand" division and equipped with French rifles, helmets and insignia. Stowers was part of a new division that, by the end of the war, included a commissioned black officer, and saw sustained combat. Due to compromises with the institutional racism of the day, this combat did not take place under American command; although his unit arrived in France as part of the American Expeditionary Force, Stowers' regiment, like the others in the division, was seconded to the French 157th," badly in need of reinforcement, under the command of the General Mariano Goybet.

The 28th of September 1918 could not have opened well for Corporal Freddie Stowers and the men of his regiment. They had been walking for three days. It was 0545 hrs, and it was cold, foggy in the Champagne Marne Sector, and they were about to attack a hill overlooking a farm near Ardeuil, Hill 188, defended by a determined German force. If Freddie Stowers was nervous that morning he set aside his fears and tended to the needs of the soldiers in his squad. Corporal Stowers was a leader, and as such his men came first. He moved down the trench line joking, checking equipment, calming nerves and ensuring that every man was ready for the attack. For Freddie Stowers, 21 yrs old, thousands of miles away from Sandy Springs, from family and familiar things, this would be his last day among the living.

Adrenaline pumped liquid fire into their guts as the whistles blew and they went over the top in the attack. The going was rough, a steady uphill climb in the open into a hail of machine gun, rifle, and mortar fire. Abruptly the fire from the German trenches ceased and the Germans crawled up onto the parapets of their trenches hands in the air yelling "Kamerad!" (friend) meaning that they wished to surrender. The sense of relief experienced by the men of C Company must have been intense. The fight was over and those who made it this far would live another day. The Americans were out in the open now 100 feet from the German positions when a whistle blew, this time from inside the German lines. The here-to-fore surrendering Germans dropped back behind their weapons and opened up on the Americans in the open. The dirtiest of martial tricks; feigning surrender.

The lieutenant commanding Stowers' platoon went down, followed by the more senior noncommissioned officers. Corporal Stowers, trained to lead a section of a rifle squad was now in command of a battered and demoralized platoon. Stowers took charge. Rallying his men they attacked and destroyed the machine guns. But there was another trench full of machine guns to be dealt with and there would be no surrender taken from this bunch. Freddie Stowers rallied the survivors and continued the attack.

Stowers began crawling toward a German machine gun nest and shouted for his men to follow. The platoon successfully reached the first German trench line and reduced the machine guns by enfilade fire. Stowers then reorganized his force and led a charge against the second German line of trenches. During this assault, Stowers was struck by an enemy machine gun, but kept going until he was struck a second time. He collapsed from loss of blood, but ordered his men not to be discouraged and to keep going and take out the German guns. Inspired by Stowers' courage, the men forged ahead and successfully drove the Germans from the hill and into the plain below..

Somewhere on Hill 188 Freddie Stowers collapsed and died. He died in the company of the soldiers he inspired in the midst of a great feat that would not be recognized until 73 years later. His family, none the wiser for his courage and bravery, mourned his death and then… moved on with life. He is buried, along with 133 of his comrades, at the Meuse-Argonne American Cemetery and Memorial east of the village of Romagne-sous-Montfaucon. 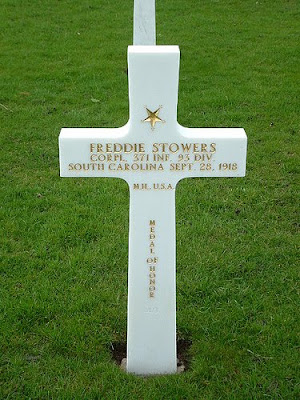 Although he was recommended for a Medal of Honor, the paperwork inexplicably languished for decades. But on April 24, 1991, U.S. President George Bush presented Stowers' two surviving sisters with a Medal of Honor posthumously. The award came 72 years after Corporal Freddie Stowers gave his life for this country in faraway France.

Corporal Stowers, distinguished himself by exceptional heroism on September 28, 1918 while serving as a squad leader in Company C, 371st Infantry Regiment, 93d Division. His company was the lead company during the attack on Hill 188, Champagne Marne Sector, France, during World War I. A few minutes after the attack began, the enemy ceased firing and began climbing up onto the parapets of the trenches, holding up their arms as if wishing to surrender. The enemy's actions caused the American forces to cease fire and to come out into the open. As the company started forward and when within about 100 meters of the trench line, the enemy jumped back into their trenches and greeted Corporal Stowers' company with interlocking bands of machine gun fire and mortar fire causing well over fifty percent casualties. Faced with incredible enemy resistance, Corporal Stowers took charge, setting such a courageous example of personal bravery and leadership that he inspired his men to follow him in the attack. With extraordinary heroism and complete disregard of personal danger under devastating fire, he crawled forward leading his squad toward an enemy machine gun nest, which was causing heavy casualties to his company. After fierce fighting, the machine gun position was destroyed and the enemy soldiers were killed. Displaying great courage and intrepidity Corporal Stowers continued to press the attack against a determined enemy. While crawling forward and urging his men to continue the attack on a second trench line, he was gravely wounded by machine gun fire. Although Corporal Stowers was mortally wounded, he pressed forward, urging on the members of his squad, until he died. Inspired by the heroism and display of bravery of Corporal Stowers, his company continued the attack against incredible odds, contributing to the capture of Hill 188 and causing heavy enemy casualties. Corporal Stowers' conspicuous gallantry, extraordinary heroism, and supreme devotion to his men were well above and beyond the call of duty, follow the finest traditions of military service, and reflect the utmost credit on him and the United States Army. 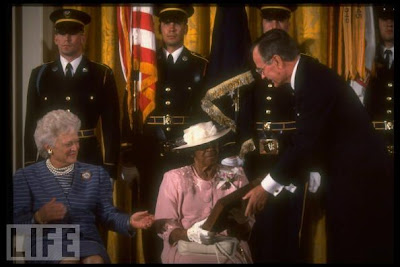