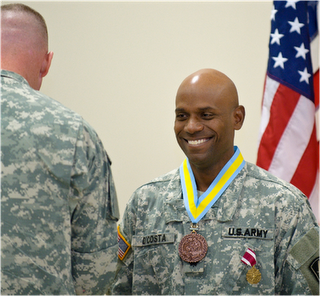 
As a boy growing up in Uganda, Joseph D'costa became inspired by America's role in World War II and told his teacher he wanted to go to the U.S. Military Academy someday.

"She laughed at me for my dream of going to West Point, telling me it would be impossible because I wasn't an American and Uganda had no ties to the U.S.," he recalled. "I still remember that to this day."

The thirteenth of 14 children raised by an Indian father and an African mother, D'costa was exiled to Austria at age 7 following Idi Amin's 1971 rise to power in Uganda. Two years later, he came to the United States and ultimately got into West Point on a third and final attempt, earning his commission in 1989.

"When we talk about the diversity of soldiers across our Army, Lieutenant Colonel D'Costa's life story is one that tells a great story and serves as a motivational and inspiring example for our soldiers, [Defense Department] civilians and the nation's civilian population," said Army Lt. Col. Roger O'Steen, the brigade's executive officer.

Shortly after Amin seized the Ugandan presidency in a military coup, D'costa's mother fell ill with pneumonia-like symptoms. Because of her religious faith, however, she didn't get proper treatment as Amin decreed that anyone who was not a Muslim would get sent to the back of the line for health care. She died at age 42.

"For me, it was very devastating, to realize the person I depended on so much was no longer there," said D'costa, who was 6 years old at the time. He said Amin then declared that anybody who wasn't 100 percent black had a choice: leave Uganda or face execution.

D'costa's father fled to India. A brother and sister got sent to Italy, and D'costa took exile in Austria with five other siblings. Three stayed behind.

"I was half, so I was considered impure and had to leave," he said. "Here's a black man saying, 'You are not the perfect race.' When you experience racism from your own race, ... I was not expecting that.

"Idi Amin was killing so many innocent people when they weren't leaving the country fast enough," he continued. "Books were burned. Even educated blacks got killed, because they were considered threats to Amin."

The "Butcher of Uganda," as Amin became known, ruled over the nation for eight years. The number of opponents killed, tortured or imprisoned varies from 100,000 to a half million, according to biographical accounts. The dictator was ousted in 1979 by Ugandan nationalists, and he fled into exile.

In Austria, a Catholic priest looked after D'costa, who spoke Swahili in Uganda and never learned English. In time, he learned German.

D'costa said he told the priest about his desire to attend West Point.

The priest was a friend of then-U.N. Secretary Gen. Kurt Waldheim, who arranged for 9-year-old D'costa and several siblings to go to the United States. He went to live with an older brother in Englewood, N.J.
After graduating high school in 1983, D'costa applied to West Point, but he was turned down.

"They said I'm not American and don't speak English well enough -- the very thing that teacher was telling me would happen," he said.

So he joined the Army ROTC cadet corps at Providence College in Rhode Island. Following his freshman year, the department head offered him a full scholarship, but he'd have to abandon his West Point dream and remain at Providence.

"It would've been the easy way out," he said, "but I needed to know how far I was willing to commit. I had given up on that, but [the ROTC department head] said, 'If West Point is in your heart, you need to apply again.'"

D'costa submitted a second application, but West Point was already at its 1,500-cadet limit, so he had to go to the U.S. Military Academy Preparatory School at Fort Monmouth, N.J., for a year and then apply again. If turned down, he would have been too old for another shot, but he finally was accepted and became a 21-year-old "plebe."

D'costa served in the Gulf War as a field artillery officer. He left the Army in 1994, but joined the Army Reserve two years later. Since then, he's deployed twice to Iraq and once to Afghanistan, and he has supported military relief missions following Hurricane Katrina and the Pakistan earthquake.

At a ceremony in Lafayette on March 12, he'll turn over the battalion command that he's held since 2008. He's set to leave Fort Benning on Feb. 11.

"My life should've ended in Uganda. All these people I encountered along the way were put into my life to help me reach my goals. ... I never looked at my skin color as a reason I did not get to West Point at first. They were looking for certain qualities and tools I needed to learn."

D'costa will return to work in the private sector, but he's expected to graduate from the U.S. Army War College by July. From there, he'll learn if the Army has any further plans for him.

The lieutenant colonel praised the U.S. military for preserving freedom around the globe and said he stays in the Army Reserve to serve his country.

"The United States could've said 'no' to me," he said. "Putting my life on the line for a country that took me in is a small price to pay. ... Freedom is so priceless, and all I have to do is serve in the reserves to continue saying 'thank you.' Until the Army tells me to get out, I'll stay.

"This is the greatest country in the world," he continued. "When I say that, I'm not just saying it because I heard it from somebody else. ... The majority of Americans don't know what it's like when you have no freedom."

D'costa said he hopes ultimately to work for NASA. In the late 1990s, he spent two years with the agency in a liaison role for a civilian company.

"West Point seemed like an impossible goal, ... but I kept pursuing that goal till I made it happen," he said. "You can achieve anything you want -- you just have to put a little effort into it."