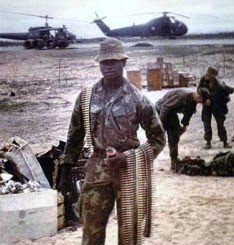 Robert Henry Jenkins, Jr. (1 June 1948–5 March 1969), Private First Class, United States Marine Corps, awarded the Medal of Honor for actions while serving as a scout and driver with Company C, 3rd Reconnaissance Battalion. The Medal of Honor was presented to his family at the White House by Vice President Spiro T. Agnew on 20 Apr 1970. Jenkins is buried at Sister Spring Baptist Cemetery in Interlachen, Florida. 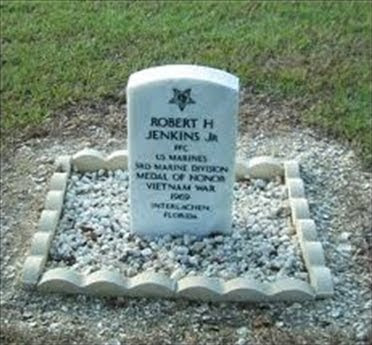 His award citation reads as follows:

for service as set forth in the following

"For conspicuous gallantry and intrepidity at the risk of his life above and beyond the call of duty while serving as a Marine Gunner with Company C, Third Reconnaissance Battalion, Third Marine Division in connection with operations against enemy forces in the Republic of Vietnam. Early on the morning of 5 March 1969, Private First Class Jenkins' twelve-man reconnaissance team was occupying a defensive position at Fire Support Base Argonne south of the Vietnamese Demilitarized Zone. Suddenly, the Marines were assaulted by a North Vietnamese Army platoon employing mortar, automatic weapons, and hand grenades. Reacting instantly, Private First Class Jenkins and another Marine quickly moved into a two-man fighting emplacement, and as they boldly delivered accurate machine gun fire against the enemy, a North Vietnamese soldier threw a hand grenade into the friendly emplacement. Fully realizing the inevitable results of his action, Private First Class Jenkins quickly seized his comrade, and pushing the man to the ground, he leaped on top of the Marine to shield him from the explosion. Absorbing the full impact of the detonation, Private First Class Jenkins was seriously injured and subsequently succumbed to his wounds. His courage, inspiring valor and selfless devotion to duty saved a fellow Marine from serious injury or possible death and upheld the highest traditions of the Marine Corps and the United States Navy. He gallantly gave his life for his country." 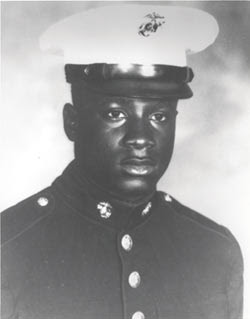