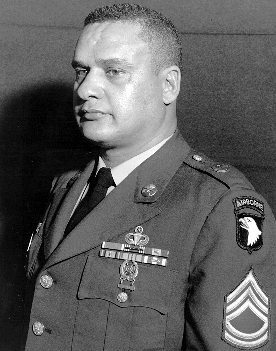 Webster Anderson was born July 15th, 1933 in Winnsboro, SC and joined joined the Army in 1953. He sreved in Korea during that war and was later deployed to Vietnam during that conflict as well. On October 15, 1967 was serving as a Staff Sergeant with Battery A, 2nd Battalion, 320th Field Artillery Regiment, 101st Airborne Infantry Division (Airmobile). On that day, Anderson's artillery unit was attacked by North Vietnamese forces near Tam Kỳ in the Republic of Vietnam.

Anderson directed the defense of the unit's position and continued to lead after twice being severely wounded. There were 46 men on a narrow hilltop in the middle of the jungle. When it was over, there were 12 left. The position was later dubbed "Sad Hill". The pilot of the medical evacuation helicopter (Dustoff) that flew him out to the hospital was Patrick Brady, who would later earn the Medal of Honor for heroic actions in evacuating other wounded in a different action. Despite losing both of his legs and part of an arm, he survived his wounds and was promoted to the rank of Sergeant First Class before being retired and awarded the Medal of Honor for his actions during the battle.

After being sent home and spending a year in the hospital, he still never quit. Upon leaving the service he moved back to his home in Winnsboro where he led an active life with his family. He expressed no bitterness about the high personal price he paid for his service to the nation. He donned his artificial limbs and opened a TV Repair business, putting three kids through college. Webster Anderson died at age 70 on August 30, 2003 of colon cancer and was buried in Blackjack Baptist Church Cemetery in his hometown. 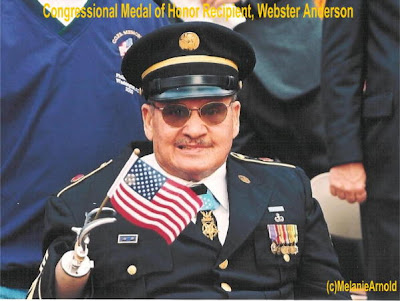 SFC Anderson (then S/SGT.), distinguished himself by conspicuous gallantry and intrepidity in action while serving as chief of section in Battery A, against a hostile force. During the early morning hours Battery A's defensive position was attacked by a determined North Vietnamese Army infantry unit supported by heavy mortar, recoilless rifle, rocket propelled grenade and automatic weapon fire. The initial enemy onslaught breached the battery defensive perimeter. SFC. Anderson, with complete disregard for his personal safety, mounted the exposed parapet of his howitzer position and became the mainstay of the defense of the battery position. SFC Anderson directed devastating direct howitzer fire on the assaulting enemy while providing rifle and grenade defensive fire against enemy soldiers attempting to overrun his gun section position. While protecting his crew and directing their fire against the enemy from his exposed position, 2 enemy grenades exploded at his feet knocking him down and severely wounding him in the legs. Despite the excruciating pain and though not able to stand, SFC Anderson valorously propped himself on the parapet and continued to direct howitzer fire upon the closing enemy and to encourage his men to fight on. Seeing an enemy grenade land within the gun pit near a wounded member of his gun crew, SFC Anderson heedless of his own safety, seized the grenade and attempted to throw it over the parapet to save his men. As the grenade was thrown from the position it exploded and SFC Anderson was again grievously wounded. Although only partially conscious and severely wounded, SFC Anderson refused medical evacuation and continued to encourage his men in the defense of the position. SFC Anderson by his inspirational leadership, professionalism, devotion to duty and complete disregard for his welfare was able to maintain the defense of his section position and to defeat a determined attack. SFC Anderson's gallantry and extraordinary heroism at the risk of his life above and beyond the call of duty are in the highest traditions of the military service and reflect great credit upon himself, his unit, and the U.S. Army. 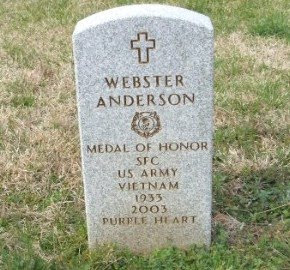 The day I was born, October 15, 1967, this brave man was being blown to pieces in Vietnam. RIP Webster - you are a hero.