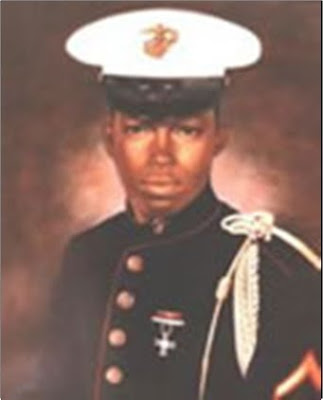 Ralph Henry Johnson was born on January 11, 1949, in Charleston, South Carolina. He enlisted in the U.S. Marine Corps Reserve at Oakland, California on March 23, 1967, and was discharged to enlist in the regular Marine Corps on July 2, 1967.

In January 1968, he arrived in the Republic of Vietnam, and served as a reconnaissance scout with Company A, 1st Reconnaissance Battalion, 1st Marine Division.


On March 5, 1968, while on Operation Rock, deep in enemy-held territory near the Quan Duc Valley, his 15-man reconnaissance patrol was attacked by a platoon-sized enemy force. When a hand grenade landed in the fighting hole he shared with fellow Marines, he yelled a warning and immediately hurled his body over the explosive charge. Absorbing the full impact of the blast, was killed instantly. His heroic actions on that day were recognized with a posthumous award of the United States' highest military decoration — the Medal of Honor.

Ralph H. Johnson is buried in the Beaufort National Cemetery in South Carolina, not far from his native Charleston. 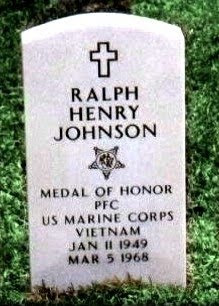 The President of the United States takes pride in presenting the MEDAL OF HONOR posthumously to
PRIVATE FIRST CLASS RALPH H. JOHNSON
UNITED STATES MARINE CORPS
for service as set forth in the following CITATION:
For conspicuous gallantry and intrepidity at the risk of his life above and beyond the call of duty while serving as a reconnaissance scout with Company A, First Reconnaissance Battalion, First Marine Division in action against the North Vietnamese Army and Viet Cong forces in the Republic of Vietnam. In the early morning hours of March 5, 1968, during OPERATION ROCK,  Private First Class Johnson was a member of a fifteen-man reconnaissance patrol manning an observation post on Hill 146 overlooking the Quan Duc Valley deep in enemy controlled territory. They were attacked by a platoon-size hostile force employing automatic weapons, satchel charges and hand grenades. Suddenly a hand grenade landed in the three- man fighting hole occupied by Private First Class Johnson and two fellow Marines. Realizing the inherent danger to his comrades, he shouted a warning and unhesitatingly hurled himself upon the explosive device. When the grenade exploded, Private First Class Johnson absorbed the tremendous impact of the blast and was killed instantly. His prompt and heroic act saved the life of one Marine at the cost of his own and undoubtedly prevented the enemy from penetrating his sector of the patrol's perimeter. Private First Class Johnson's courage-inspiring valor and selfless devotion to duty were in keeping with the highest traditions of the Marine Corps and the United States Naval Service. He gallantly gave his life for his country
/S/ RICHARD M. NIXON 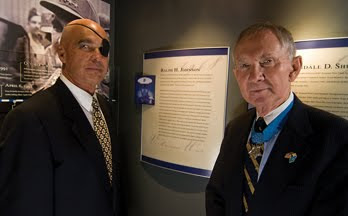 The VA Medical Center in his home town of Charleston, SC is named for Johnson