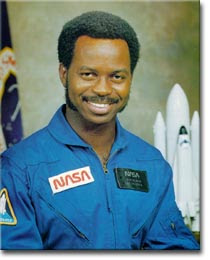 Ronald Ervin McNair, was born October 21, 1950, in Lake City, South Carolina. McNair graduated as valedictorian of Carver High School in 1967. During his summers, McNair worked in the local cotton and tobacco fields.

In 1978 McNair was selected as one of thirty-five applicants from a pool of ten thousand for the NASA astronaut program. He flew on STS-41-B aboard Challenger in February 1984, as a mission specialist becoming the second African American to fly in space. Following this mission, he was selected for STS-51-L, which launched on January 28, 1986, McNair was thus one of the seven-person crew who died on the Challenger space shuttle when it disintegrated nine miles above the Atlantic Ocean just 73 seconds after take-off.[

McNair was an accomplished saxophonist. Before his fateful last space shuttle mission he had worked with composer Jean Michel Jarre on a piece of music for Jarre's then-upcoming album Rendez-Vous. It was intended that he would record his saxophone solo on board the Challenger, which would have made McNair's solo the first original piece of music to have been recorded in space. The last of the Rendez-Vous pieces, (Last Rendez-Vous) had the additional name "Ron's Piece". Ron McNair was supposed to take part in the concert through a live feed, but that never happened.

Ron was survived by his wife Ceryl and 2 children. 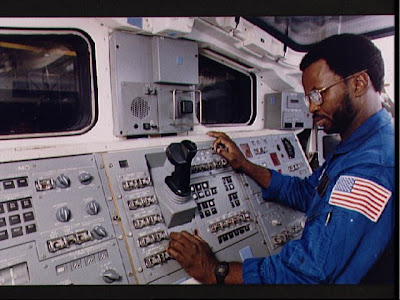