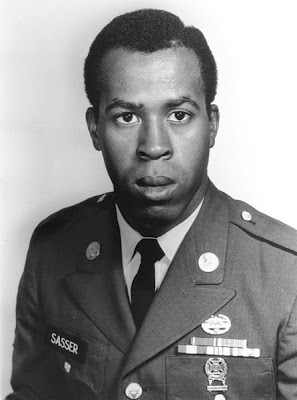 This one gives me great pleasure, because this gentlemen is still with us, and we are all greater for it. I borrowed most of the back-story from NBC.

Born September 12, 1947 in Chenango, Texas, Clarence Sasser was drafted into the Army and gave up his college deferment. His Vietnam tour lasted 51 days. When Sasser's military commitment was finished he went back to college as a Chemistry student. He then went to work for an oil refinery for over five years and eventually found satisfaction working at the Department of Veteran's Affairs.

When Clarence Sasser was drafted in 1967, he assumed that he would be just another GI. After a battery of tests indicated he should be trained as a medical aidman, he was surprised that the Army thought he might have the ability to save lives.

By the fall of 1967, Sasser was in Vietnam with the Army's 9th Infantry Division. He didn't experience a heavy firefight until January 10, 1968. Early that morning, his company was flown out toward the Mekong Delta on a reconnaissance-in-force operation to check out reports of enemy forces in the area. At about 10:00 a.m., the dozen helicopters carrying the undermanned company of slightly more than one hundred soldiers swooped down onto a large rice paddy near where the Vietcong had already been sighted. As the formation descended, the U-shaped wooded area nearly enclosing the landing zone erupted with small arms, recoilless rifle, machine-gun, and rocket fire. The mission might have been aborted, but the lead helicopter was hit and crashed, so the others immediately followed to protect it.

With the shallow water of the rice paddy roiled by enemy fire, the Americans tried to get out of the helicopters as quickly as possible and head for the mounded levees that offered them their only cover. In the first few minutes of the engagement, more than thirty men went down. The air was already filled with screams of "Medic!" when Sasser scrambled out of his helicopter. Running across the open rice paddy, he didn't have time to set medical priorities; he could only "go to the one who was calling the loudest." He slithered through the muck to get from soldier to soldier, working on his belly because standing upright meant certain death. Bullets chopping the water would sometimes trace a swift path toward an American infantryman and hit him. Sasser couldn't keep up with the casualties.

As he picked up a wounded GI and dragged him to cover against the embankment of a dike, Sasser was hit by shrapnel from an exploding rocket. Although it didn't have the energy of a bullet, the red-hot metal fragment burned itself into his shoulder. He pulled it out himself, waiving off help from medics from the other platoons.

Rushing back to the rice paddy to aid more wounded, he was hit in both legs by machine-gun fire and knocked down. He used his arms to pull himself through the mud to help a wounded soldier calling out from a hundred yards away. Close by, he saw a group of GIs huddled together, disoriented by the heavy fire; he managed to talk them into action, getting them to crawl toward the protection of a dike where they could begin to fire back at the enemy. "I felt that if I could get the guys up and fighting," he said later, "we might all get out of there somehow."

By afternoon, the enemy began to pull its main force back but left enough fighters behind to keep the Americans pinned down. Although faint from blood loss and in agonizing pain, Sasser continued to treat the wounded. Finally, at 4:00 the next morning, eighteen hours after the battle had begun, the area was sufficiently pacified for U.S. helicopters to arrange an evacuation. American troops had suffered thirty-four dead and fifty-nine wounded.

It took several months of rehabilitation in Japan before Sasser could use his legs again. While recovering, he was called into the hospital commander's office and told that he was to receive the Medal of Honor. It was presented to him by President Richard Nixon at the White House on March 7, 1969. 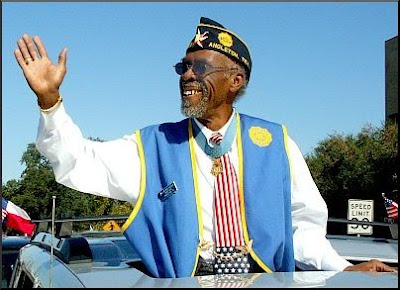 For conspicuous gallantry and intrepidity in action at the risk of his life above and beyond the call of duty. Sp5c. Sasser distinguished himself while assigned to Headquarters and Headquarters Company, 3d Battalion. He was serving as a medical aidman with Company A, 3d Battalion, on a reconnaissance in force operation. His company was making an air assault when suddenly it was taken under heavy small arms, recoilless rifle, machinegun and rocket fire from well fortified enemy positions on 3 sides of the landing zone. During the first few minutes, over 30 casualties were sustained. Without hesitation, Sp5c. Sasser ran across an open rice paddy through a hail of fire to assist the wounded. After helping 1 man to safety, was painfully wounded in the left shoulder by fragments of an exploding rocket. Refusing medical attention, he ran through a barrage of rocket and automatic weapons fire to aid casualties of the initial attack and, after giving them urgently needed treatment, continued to search for other wounded. Despite 2 additional wounds immobilizing his legs, he dragged himself through the mud toward another soldier 100 meters away. Although in agonizing pain and faint from loss of blood, Sp5c. Sasser reached the man, treated him, and proceeded on to encourage another group of soldiers to crawl 200 meters to relative safety. There he attended their wounds for 5 hours until they were evacuated. Sp5c. Sasser's extraordinary heroism is in keeping with the highest traditions of the military service and reflects great credit upon himself, his unit, and the U.S. Army. 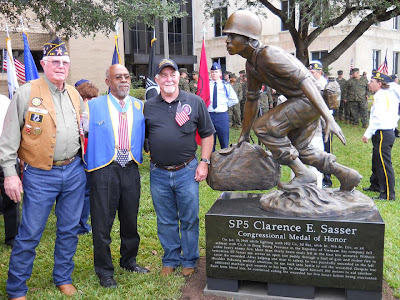 Clarence Sasser's bronze statue in front of the Brazoria County Courthouse in Texas.