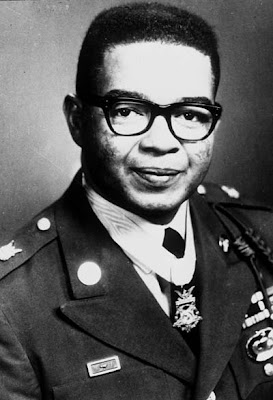 Lawrence Joel (February 22, 1928–February 4, 1984) was a United States Army medic who served in the Korean and Vietnam Wars. While serving in Vietnam, as a combat medic with the rank of Specialist Five assigned to 1st Battalion of the 503rd Infantry Regiment in the 173rd Airborne Brigade, Joel received the Silver Star and the Medal of Honor for his heroism in a battle with the Viet Cong that occurred on November 8, 1965. He was the first living black American to receive this medal since the Spanish-American War in 1898.

Lawrence Joel retired as a Sergeant First Class from military service in 1973. On February 4, 1984, Joel died of complications from diabetes. He is buried in Section 46, Lot 15-1 of Arlington National Cemetery adjacent to the Memorial Amphitheater.

In memory of Lawrence Joel and all Forsyth County veterans, the Winston-Salem Board of Aldermen (now City Council) in February 1986 decided to name the city's new coliseum the Lawrence Joel Veterans Memorial Coliseum. Construction for the coliseum began one year later and opened in 1989. Lawrence Joel is mentioned in the song "8th of November" by country group Big & Rich. Kris Kristofferson gives a prelude speech to the song in which he recognizes Joel and his heroic feats on the 8th of November, 1965 in Vietnam. The Joel Auditorium at Walter Reed Army Medical Center in Washington, D.C. is named after Lawrence Joel. The U.S. Army clinics at Fort McPherson, GA and Fort Bragg, NC, are named after Joel. 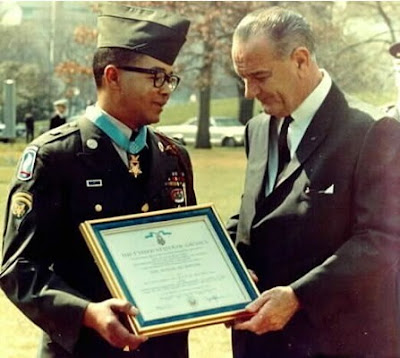 For conspicuous gallantry and intrepidity at the risk of life above and beyond the call of duty. SPC5 Joel demonstrated indomitable courage, determination, and professional skill when a numerically superior and well-concealed Viet Cong element launched a vicious attack which wounded or killed nearly every man in the lead squad of the company. After treating the men wounded by the initial burst of gunfire, he bravely moved forward to assist others who were wounded while proceeding to their objective. While moving from man to man, he was struck in the right leg by machine gun fire. Although painfully wounded his desire to aid his fellow soldiers transcended all personal feeling. He bandaged his own wound and self-administered morphine to deaden the pain enabling him to continue his dangerous undertaking. Through this period of time, he constantly shouted words of encouragement to all around him. Then, completely ignoring the warnings of others, and his pain, he continued his search for wounded, exposing himself to hostile fire; and, as bullets dug up the dirt around him, he held plasma bottles high while kneeling completely engrossed in his life saving mission. Then, after being struck a second time and with a bullet lodged in his thigh, he dragged himself over the battlefield and succeeded in treating 13 more men before his medical supplies ran out. Displaying resourcefulness, he saved the life of one man by placing a plastic bag over a severe chest wound to congeal the blood. As one of the platoons pursued the Viet Cong, an insurgent force in concealed positions opened fire on the platoon and wounded many more soldiers. With a new stock of medical supplies, SPC5 Joel again shouted words of encouragement as he crawled through an intense hail of gunfire to the wounded men. After the 24 hour battle subsided and the Viet Cong dead numbered 410, snipers continued to harass the company. Throughout the long battle, SPC5 Joel never lost sight of his mission as a medical aidman and continued to comfort and treat the wounded until his own evacuation was ordered. His meticulous attention to duty saved a large number of lives and his unselfish, daring example under most adverse conditions was an inspiration to all. SPC5 Joel's profound concern for his fellow soldiers, at the risk of his life above and beyond the call of duty are in the highest traditions of the U.S. Army and reflect great credit upon himself and the Armed Forces of his country. 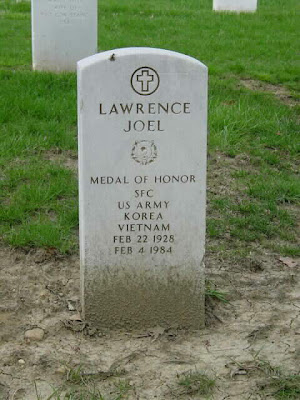 you are doing yeomen work bringing the feats of these fine service members to light. i wonder if the naacp does as good job of educating others about black service members sacrifices.