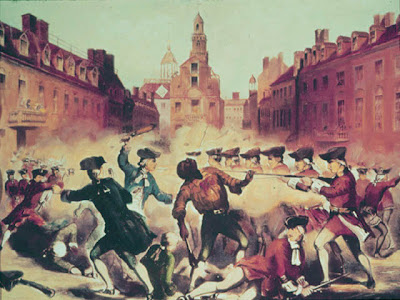 Yeah, we Conservatives (to include Libertarians, Republicans, and Tea Party folk) are such a wretched, racist bunch. So racist in fact our historical annals are filled with things like fighting for segregation, starting the KKK, and spying on Martin Luther King. Oh, wait...that was the Democrats. I've gone over that before. In fact, I'm so racist that each day this month I shall endeavor to highlight an inspirational black American or group of black Americans.

Since I missed yesterday I'll have to post two today.

First up is one of the first black heroes of the United States. Today we salute Crispus Attucks, the first martyr of the American Revolution.

In the fall of 1768, British soldiers were sent to Boston to help control growing colonial unrest, but this only increased tensions with those colonists who opposed the presence of troops. After dusk on Monday, March 5, 1770, a crowd of colonists confronted a sentry who had struck a boy for complaining that an officer was late in paying a wigmaker’s bill.

As anger escalated, a church bell rang, which drew people out of their homes. The British soldiers of the 29th Regiment of Foot were called to duty to quell the burgeoning riot. In turn, townspeople responded by hurling snowballs and debris at the soldiers. A group of men led by Attucks approached the vicinity of the government building (now known as the Old State House) with clubs in hand. Violence soon erupted, and a soldier was struck with a thrown piece of wood. Some accounts named Attucks as the person responsible. Other witnesses stated that Attucks was "leaning upon a stick" when the soldiers opened fire.

Little is known for certain about Crispus Attucks beyond that he was possibly a sailor and, along with rope maker Samuel Gray and mariner James Caldwell, died "on the spot" during the incident at the scene of the attack. Some speculate that he was of mixed African and Wampanoag Indian heritage while others claim he was an escaped slave.

Five Americans were killed and six others were wounded in what became known as the Boston Massacre. Two of those wounded also died. Attucks was the first one killed; he took two bullets in the chest. County Coroners Robert Pierpoint and Thomas Crafts Jr. conducted an autopsy on Crispus Attucks. Attucks’ body was carried to Faneuil Hall, where it lay in state until Thursday, March 8, when he and the other victims were buried together in the Granary Burying Ground.

Founded in 1660, the Granary Burying Ground is the city of Boston's third-oldest cemetery. Located on Tremont Street, it is the final resting place for many notable Revolutionary War-era patriots, including three signers of the Declaration of Independence (John Hancock, Samuel Adama, and Robert Paine), Paul Revere and the aforementioned five victims of the Boston Massacre. The cemetery is adjacent to Park Street Church and immediately across from Suffolk University Law School. 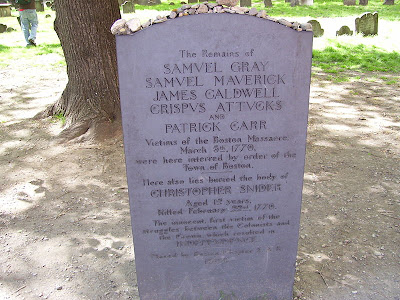