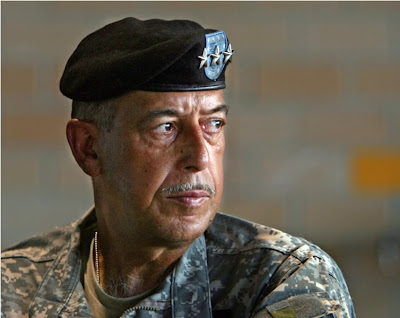 (Finally, I get to post about someone I've met)

Among his assignments, he was Commanding General, First Army in Atlanta, responsible for up-training reserve component forces for deployment overseas; 2d Infantry Division, in Korea; Deputy Commanding General/Assistant Commandant, United States Army Infantry Center and School, Fort Benning, Georgia; and the Assistant Division Commander, Maneuver/Support, 1st Calvary Division, Fort Hood, Texas. He has also served as the Brigade Commander, 1st Brigade, 3rd Infantry Division, Fort Stewart, Georgia; Senior Mechanized Observer/Controller, “Scorpion 07,” National Training Center (that’s 25 rotations at the National Training Center at Fort Irwin, California. Google it…); and Commander, 4th Battalion, 16th Infantry Regiment, 1st Infantry Division, in Goeppingen, Germany. It was as the CO of the 4/16 that I knew a then-Lieutenant Colonel Honoré, known affectionately to his troops as “Uncle Russ”. You couldn’t find a single troop in that batallion who anything bad to say about Russ Honoré. He wasn’t in my chain of command but I’d have followed him to war no questions asked.

On August 31, 2005, Honoré was designated commander of Joint Task Force Katrina responsible for coordinating military relief efforts for Hurricane Katrina-affected areas across the Gulf Coast. Honoré's arrival in New Orleans came after what was widely believed to be a poor performance by the Federal Emergency Management Agency (FEMA) and its director Michael D. Brown, but was more directly related to how piss-poorly everything up to and during the hurricane was mismanaged by Mayor Ray “Chocolate City” Nagin and Governor Kathleen Blanco. Just sayin’…

He gained media celebrity and accolades for his apparent turning around of the situation in the city as well as his gruff management style which contrasted with what many felt were the empty platitudes of civilian officials. In one widely played clip, Honore was seen on the streets of the city, barking orders to subordinates and, in ensuring that while his soldiers were armed, their weapons were kept down in an unthreatening manner, telling them "We're on a rescue mission damn it!" Mayor Ray Nagin was quoted on a radio interview September 1, 2005, saying: "Now, I will tell you this -- and I give the president some credit on this -- he sent one John Wayne dude down here that can get some stuff done, and his name is General Honoré. And he came off the doggone chopper, and he started cussing and people started moving. And he's getting some stuff done." (Gee thanks, Ray. You botched it pretty well and had to be bailed out by someone who knew how to get results.) On September 20, 2005 at a press conference on Hurricane Rita with Nagin, Honoré made headlines nationwide when he told a reporter not to get "stuck on stupid" in reference to a question about the government response to Hurricane Katrina.

General Honoré retired on February 29, 2008, following 37 years of active service with the United States Army. He continues to speak and consult nationally on Building a Culture of Preparedness. I urge you to go to his website and check it out. Sadly, I just missed my chance at seeing General Honoré again a couple weeks ago. I found out after the fact that he was the guest speaker at the annual Black History Month Bazaar at The Citadel in Charleston, SC. 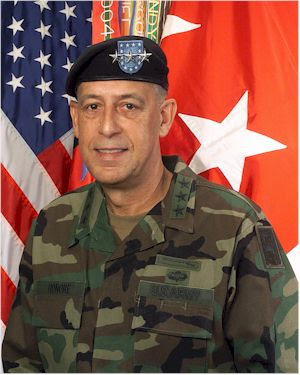 Yup...back in Germany when he was a Lieutenant Colonel in charge of an infantry battalion and I was an MP working for US Customs, about 22 years ago