I first read about PFC James Anderson when I was about 17, heading into my senior year of high school. I found him inspirational then, and I still do almost 25 years later.


Private First Class James Anderson, Jr (January 22, 1947 - February 28, 1967) was a United States Marine who posthumously received the Medal of Honor for heroism while serving in Vietnam in February 1967. When his Medal of Honor was awarded on August 21, 1968, he became the first black U.S. Marine recipient of the Medal of Honor.

Anderson was born on January 22, 1947, in Los Angeles, California. After graduating from senior high school, he attended Los Angeles Harbor Junior College for a year and a half.

Private Anderson left college to enlist in the United States Marine Corps on February 17, 1966 and received recruit training with the 1st Recruit Training Battalion, Marine Corps Recruit Depot, San Diego, California. He was promoted to private first class upon graduation from recruit training in August 1966. He then transferred to Camp Pendleton, California where he received further training with the 2nd Battalion, 2nd Infantry Training Regiment.

In December 1966, Private Anderson arrived in the Republic of Vietnam, where he served as a rifleman with Company F, 2nd Battalion, 3rd Marines, 3rd Marine Division in Quang Tri Province. Two months later he gave his life to save his fellow Marines.

For conspicuous gallantry and intrepidity at the risk of his life above and beyond the call of duty as a rifleman, Second Platoon, Company F, Second Battalion, Third Marines, Third Marine Division, in Vietnam on 28 February 1967. Company F was advancing in dense jungle northwest of Cam Lo in an effort to extract a heavily besieged reconnaissance patrol. Private First Class Anderson's platoon was the lead element and had advanced only about 200 meters when they were brought under extremely intense enemy small arms and automatic weapons fire. The platoon reacted swiftly, getting on line as best they could in the thick terrain, and began returning fire. Private First Class Anderson found himself tightly bunched together with the other members of the platoon only 20 meters from the enemy positions. As the fire fight continued several of the men were wounded by the deadly enemy assault. Suddenly, an enemy grenade landed in the midst of the Marines and rolled alongside Private First Class Anderson's head. Unhesitatingly and with complete disregard for his own personal safety, he reached out, grasped the grenade, pulled it to his chest and curled around it as it went off. Although several Marines received shrapnel from the grenade, his body absorbed the major force of the explosion. In this singularly heroic act, Private First Class Anderson saved his comrades from serious injury and possible death. His personal heroism, extraordinary valor, and inspirational supreme self-sacrifice reflected great credit upon himself and the Marine Corps and upheld the highest traditions of the United States Naval Service. He gallantly gave his life for his country. 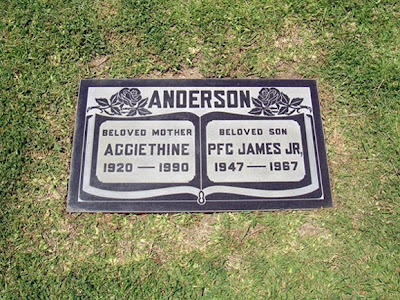 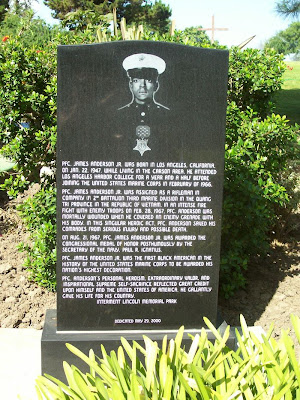 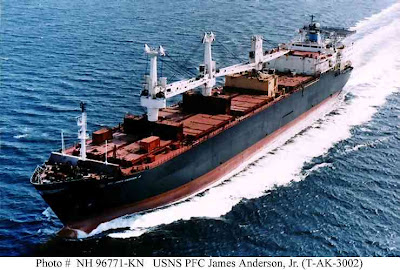 Hey, as a former Marine, I found your blog to be outstanding!! Would I have your permission to post it on my blog? I usually write comedy, but this is too good not to pass on to others. Thanks. (Check out mine if you would like http://therealbadandy.blogspot.com)

Absolutely, Andy. Feel free. You'll find my blog has its fair share of humor and silliness, and its fair share of seriousness. My whole Black History Month series this year was exceptionally well-received, especially from my fellow veterans. Y'know, I'd taken some time off from writing to refresh my batteries and pursue a couple other creative outlets, but your comment today was the kick in the ass I needed to get writing again. Semper Fi, Devil Dog!

Very well said, i was researching him and came across your page.. You see this is my daughters great uncle and i was trying to explain to her who he was which for a 6 yr old is hard but you have haelped her understand a little bit.. Thankyou

Wow....I got chills reading your gracious comment. I never expected a family member of one of our fallen warriors that I've written about to comment on my site. I'm glad I was able to help your daughter understand the incredible bravery & sacrifice of your uncle. Men like James Anderson are who make this nation great. God bless you & your family, and thank you again.