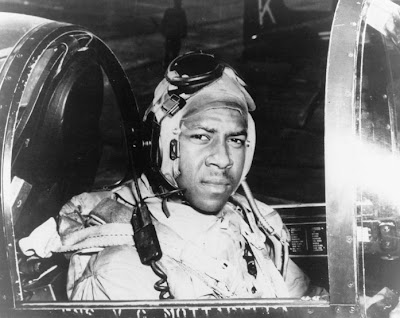 Born in Hattiesburg, Mississippi, Brown enlisted in the Naval Reserve in 1946 and was appointed a Midshipman, at the Ohio State University NROTC the following year. After attending Navy pre-flight school and flight training, he was designated a Naval Aviator in October 1948. Midshipman Brown was then assigned to Fighter Squadron 32. He received his commission as an Ensign in April 1949. 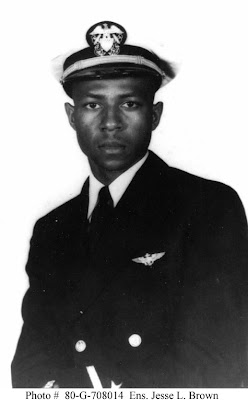 During the Korean War, his squadron (VF-32) operated from USS Leyte (CV-32), flying F4U-4 Corsair fighters in support of United Nations forces. On 4 December 1950, while on a close air support mission in the Chosin Reservoir, Ensign Brown's plane was hit by enemy fire and crash-landed. His squadron mates from VF-32 thought Brown was dead, until they saw him slide back his canopy and wave. At this time, his wingman, LT(jg) Thomas J. Hudner, Jr., intentionally crash-landed his Corsair to attempt to save his friend, who was in shock and pinned in his aircraft. As daylight faded, with Hudner at his side always, in the air and now on the ground, Jesse Brown passed away. Ensign Jesse L. Brown was awarded the Distinguished Flying Cross for his Korean War combat service and Lt. (jg) Hudner, Jr. was awarded the Medal of Honor for his actions that day. 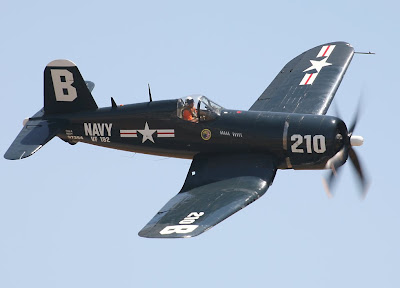 The story of that combat action was chronicled by Lieutenant Commander Thomas J. Cutler, U.S. Navy (Retired) in Naval Proceedings.

Flying 1,000 feet above the icy mountains of Korea, the Corsair’s engine cut out—the result of a lucky shot from a Communist gunner below. Rapidly losing altitude, the pilot, Ensign Jesse Brown, couldn’t bail out or clear the mountain ahead. He had no choice but to attempt a wheels-up, dead-stick landing. The deep snow cushioned the landing a bit, but the terrain beneath it was rugged, and the fighter came to a jarring stop, badly damaged with smoke pouring from its shattered engine.

Flying above, his wingman, Lieutenant (junior grade) Thomas Hudner, was relieved to see that Brown was alive, waving from the open cockpit, but was alarmed when it became apparent that Brown could not escape from the burning aircraft.

The two Corsair wingmen had come from different backgrounds. Brown was the son of a sharecropper in rural Mississippi, who had come into the Navy via a pre-flight school in Ottumwa, Iowa, to become the service’s first black aviator. Hudner was a New Englander whose father was a successful business owner who could afford to send his son to a prestigious prep school prior to his entry into the U.S. Naval Academy. But now, the great melting pot of the Navy had brought these two men together as squadron mates, bonded by the wings of gold on their chests.

Knowing that a rescue helicopter would not arrive for at least 15 minutes and that enemy soldiers were closing on the helpless pilot, Hudner decided to join his wingman on the ground so that he might remove him from the aircraft before it exploded and help him evade capture.

Tightening his harness and dumping his remaining fuel and ordnance, Hudner dropped his flaps and tailhook and aimed for a spot less than 100 yards from Brown’s wrecked aircraft. Hudner’s Corsair slammed into the rocks and snow, and feeling the rush of sub-zero air, the young pilot briefly wondered if he had made the right decision. But he survived the landing and, rushing to his wingman’s aid, tried to pull Brown from the aircraft. But Hudner discovered that Brown’s right leg was crushed and tangled with the aircraft’s twisted metal, making it impossible to extricate him. Desperate to do something to help, Hudner began packing snow around the smoking cowling with his bare hands, hoping to subdue the fire within.

When the rescue helicopter arrived, with enemy soldiers approaching, the prudent decision would have been for Hudner to leave while he still could. But he and the helo pilot instead worked together, trying to remove Brown from the wreckage, who by now had lost much blood. Try as they might, the two would-be rescuers could not get Brown free. As darkness settled in and enemy troops neared, they considered trying to amputate Brown’s mangled leg. As the two men frantically wrestled with this terrible situation, Jesse Brown died, ending their dilemma. At last, Hudner and the helo pilot reluctantly escaped into the darkening sky.

In 1973, the former wingmen were brought together in spirit, as then-Captain Hudner—wearing the Medal of Honor “for conspicuous gallantry and intrepidity”—stood beside Jesse Brown’s wife, Daisy, and together they watched the brand-new frigate USS Jesse L. Brown (FF-1089) slide down the ways to join the Fleet. Not a storybook ending perhaps, but fittingly bittersweet nonetheless. 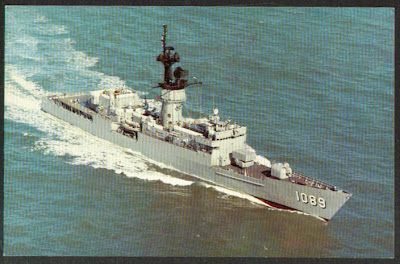