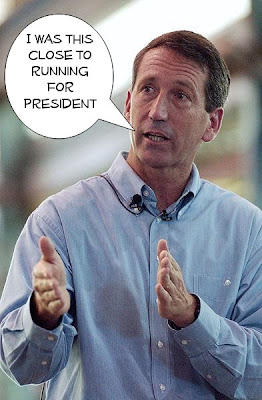 
So, now we here in South Carolina are hearing non-stop about how Lieutenant Governor Andre Bauer is calling for embattled Governor Mark Sanford to step down and resign. Our state’s second in command cites the media frenzy over Marky-Mark’s adulterous philandering and claiming that the state is crippled by questions over the legality of the governor's travel, which included trips to visit his mistress in Argentina.

Bauer says he tried to give the governor the benefit of the doubt after he admitted to having an affair. But now Bauer says he worries that calls for Sanford's impeachment will dominate next year's legislative session, instead of issues like the economy and job creation.

"The serious misconduct that has been revealed along with lingering questions and continuing distractions make it virtually impossible for our state to solve the critical problems we're facing without a change in leadership," he said.

What an utter load of crap.

The state is far from crippled. Last I saw, I was contending with thousands of my fellows going on with their business as usual on my way to work. Nobody seemed crippled to me. I didn’t see anyone on a street corner looking disheveled and unable to go on, inconsolable and wracked with uncontrollable sobs all because Mark cheated on Jenny and didn’t always fly coach.

Whoopty freakin' doooooooooooo! That and five bucks will get you a half-decaf Austrian goat-milk caramel mocha macchiato with double foam and just a touch of Madagascar cinnamon.

A few years back, I recall a certain President of them there Yew-nited States was found to have been getting his carrot waxed by an intern while on the phone with members of Congress and donating a skeeted-up blue dress to the dry cleaners of the local area.

The Slick One was impeached whilst a lame duck, ineligible for re-election, and was able to still stay in power, still reside in the Whitest of Houses, and his humiliated wife went on to be a Congresscreature herself and later an impotent Secretary of State who was sent on a crap errand to Obama’s ancestral Kenyan homeland, whilst Slick Willy went and secured the release of two young Asian reporter chix from Kim Jong Mentally Ill.

In plain English: Clinton was of a higher office leading 300 million people, committed his crimes inside the White House, was impeached by Congress, and was still allowed to finish his term with no more than a wrist-slap on the road to immortality. Sanford did his philandering in another country, away from his 4.5 million constituents, and after the state legislature reconvenes, he’ll have barely a year left in office.

According to his driving record with the South Carolina Department of Motor Vehicles, Bauer has had at least two accidents, four tickets and one suspended license for failure to pay a ticket.

On May 6, 2003, Bauer was stopped on Assembly Street in downtown Columbia for running two red lights and speeding up to 60 mph in a 35 mph zone. The officer drew his gun after Bauer got out of the car and began heading toward the officer's car in an "aggressive manner." He was issued a ticket for reckless driving.

So who’s more dangerous to South Cackalacky, the guy who can’t keep it in his pants or the guy who can barely keep it on the road? I don't condone what Sanford did, not one iota, but at least he's taken ownership of the problem.....and Bauer's just trying to save his own ass from being shut out of future political considerations by poisoned association. 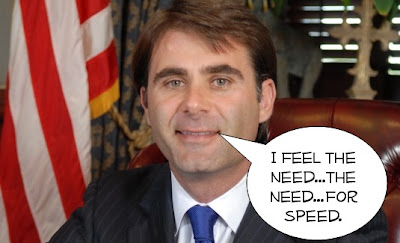 Haven't you heard? Liberals hardly ever have to pay politically for their misdeeds. A simple "my bad", and it's back to business as usual.

Oh yeah...Liberal Willie gets to ask us all to define what sex is (or as me & Jim said on the phone today "Define what "is" is.....) while the villagers are at Sanford's gates with torches & pitchforks.

I don't recall hearing Al Gore asking Bill to resign either.....he may be a bloated idiot who thinks he invented the Interwebz when all he did was invent Global Warming scams, but at least he was loyal. Bauer's trying to save his own ass by distancing himself from Sanford so he can still appeal to hard-line conservatives.

While I don't think Sanford should be impeached, I do think he should resign. How can we trust anything he says now? (I said the same thing about Pres. Clinton).

If he's impeached it will be over misuse of state funds, something every other recent governor has done. Clinton was impeached for lying to congress. But Congress said "that's ok - it was just between us guys."

As for Bauer, he's not such a bad guy. Sure he has "the need for speed", but he promised to give me flying lessons. He can't be all bad can he?

P.S. You didn't mention the politics in the requests for him to step down. Some legislator from the low country has been after him for years. Sen. Dave Thomas (my area) has also been after him. They just don't like him.

Sadly....I'm terribly ill-educated on internal SC politics. I think it's because I'm not a native, having only been here 9 years almost (this time....I was also here before for 18 months).

I was surprised to find that the LtGov runs on a separate electoral ballot than the Governor, and that the state's Adjutant General is elected and not appointed via Department of the Army through the Governor's Office.